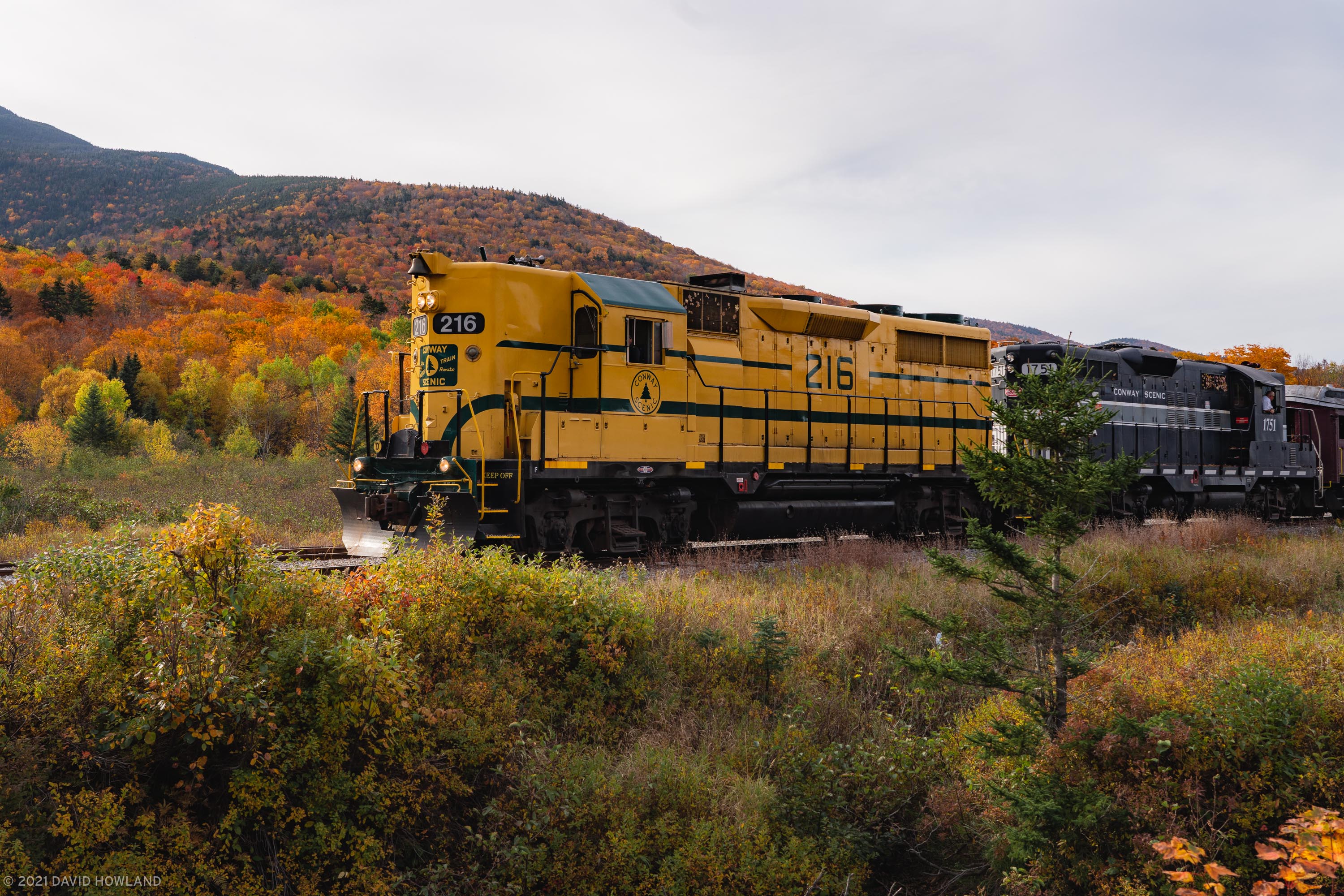 Over the last few years the most popular New England fall foliage shot has been of the Conway Scenic Railroad Mountaineer crossing the Willey Brook Bridge in Crawford Notch. This shot, although stunning, is problematic to me for a few reasons.

Despite all of this, I love trains and there was no way I was leaving New Hampshire this fall without some photos of the train against the backdrop of the fall foliage and a railroad trestle or two. So, I set out to find different viewpoints of the train moving through Crawford Notch.

My first goal was Webster Cliffs. This line of open rock faces spills downwards from the summit of Mount Webster. The viewpoint is from the eastern side of Crawford Notch and looks down on the Willey Brook Bridge. With the cliffs of Mount Willard towering above, I figured this would be an impressive shot if I could get the timing right. On my way to Mount Webster I climbed Mount Jackson and had an enjoyable hike along the ridgeline between the two before settling down to wait for the train.

I did my best to work out the timing for the train passing through the notch based on the posted trip time and departure from North Conway. Even with my fancy math, I ended up waiting on top of Webster Cliffs for about 45 minutes before I heard the first train whistle echoing off the mountains. This wait gave me time to scramble up and down three or four different cliffs trying to find the best view down to the trestle. 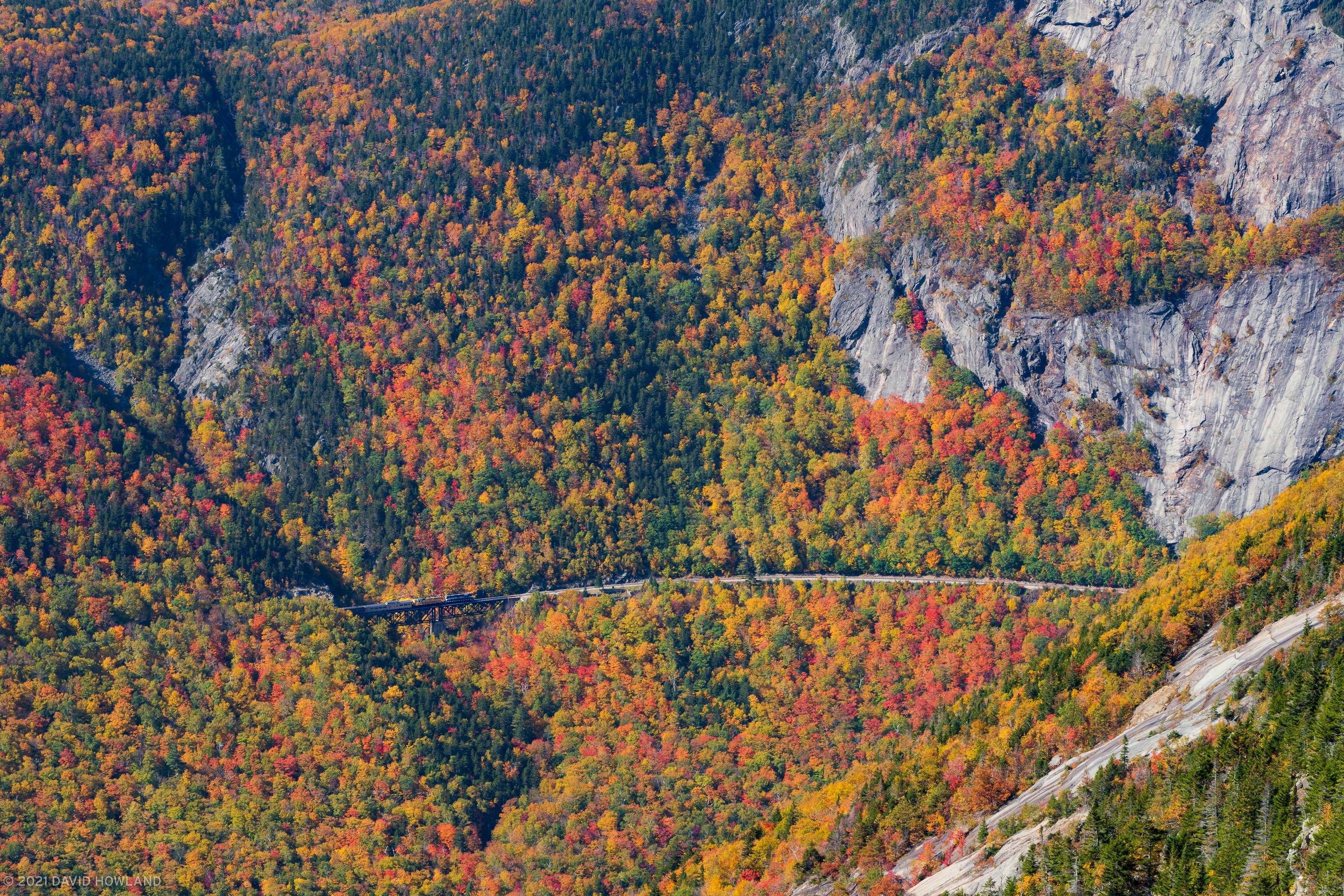 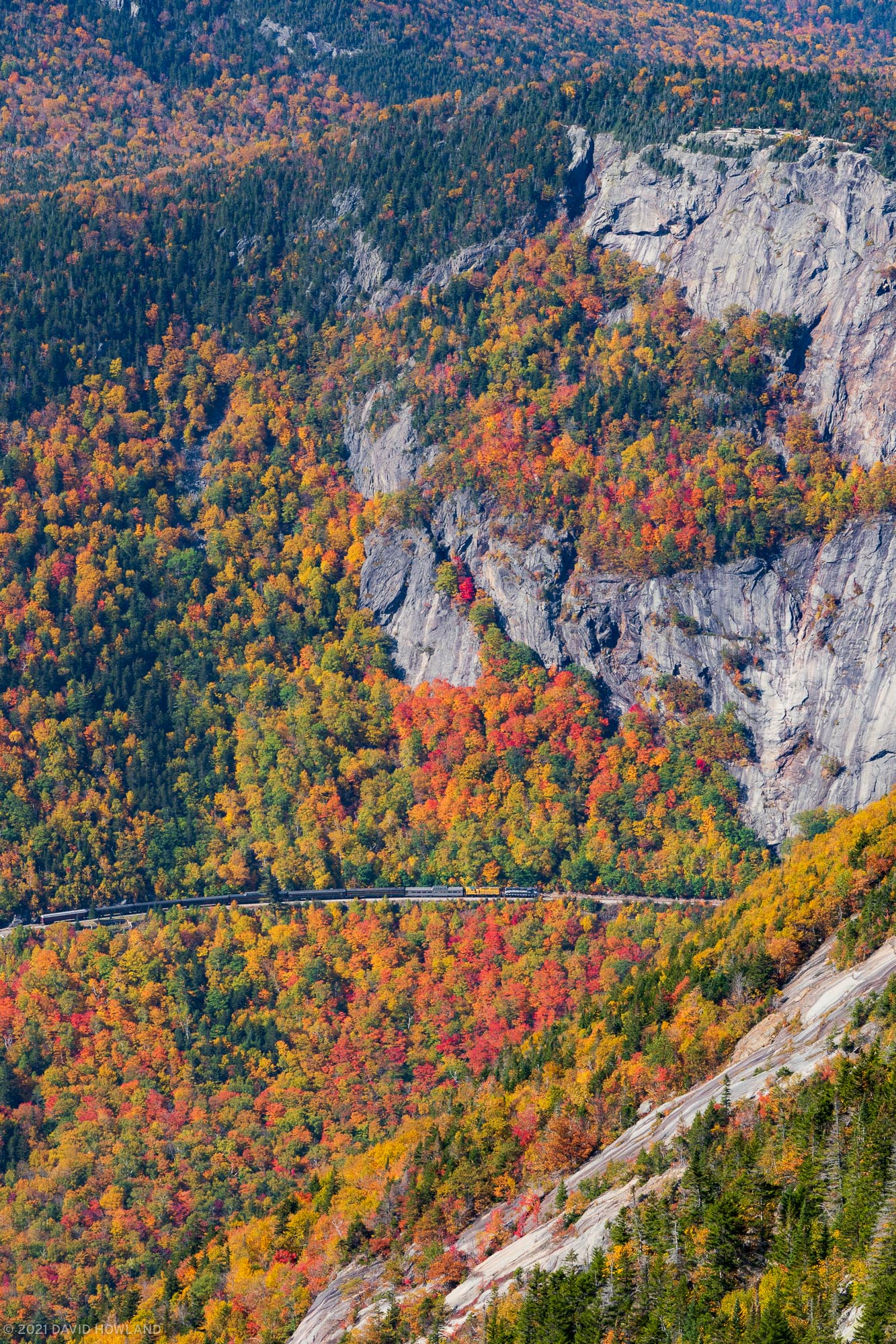 The tricky thing about these shots was getting the train to stand out from the foliage. The two locomotives are black and yellow and against the colorful trees the train just doesn’t pop from far away.

My second goal was Elephant Head. This rock outcropping that supposedly looks like an Elephant is a much shorter distance up the trail and much lower in elevation. It is farther north up the notch so there are no trestles visible. It does have a great view of the train tracks cutting through the narrowest part of Crawford Notch and running along a marsh. Because of the limited view, I wanted a shot of the train traveling south on it’s return trip. I ended up hanging out on Elephant Head for close to two hours as the train took much longer to turn around and come back south than I thought it would. The framing of the shot is tricky from Elephant Head as the tracks run right next to the road and I didn’t want the masses of parked cars cluttering up my foreground. 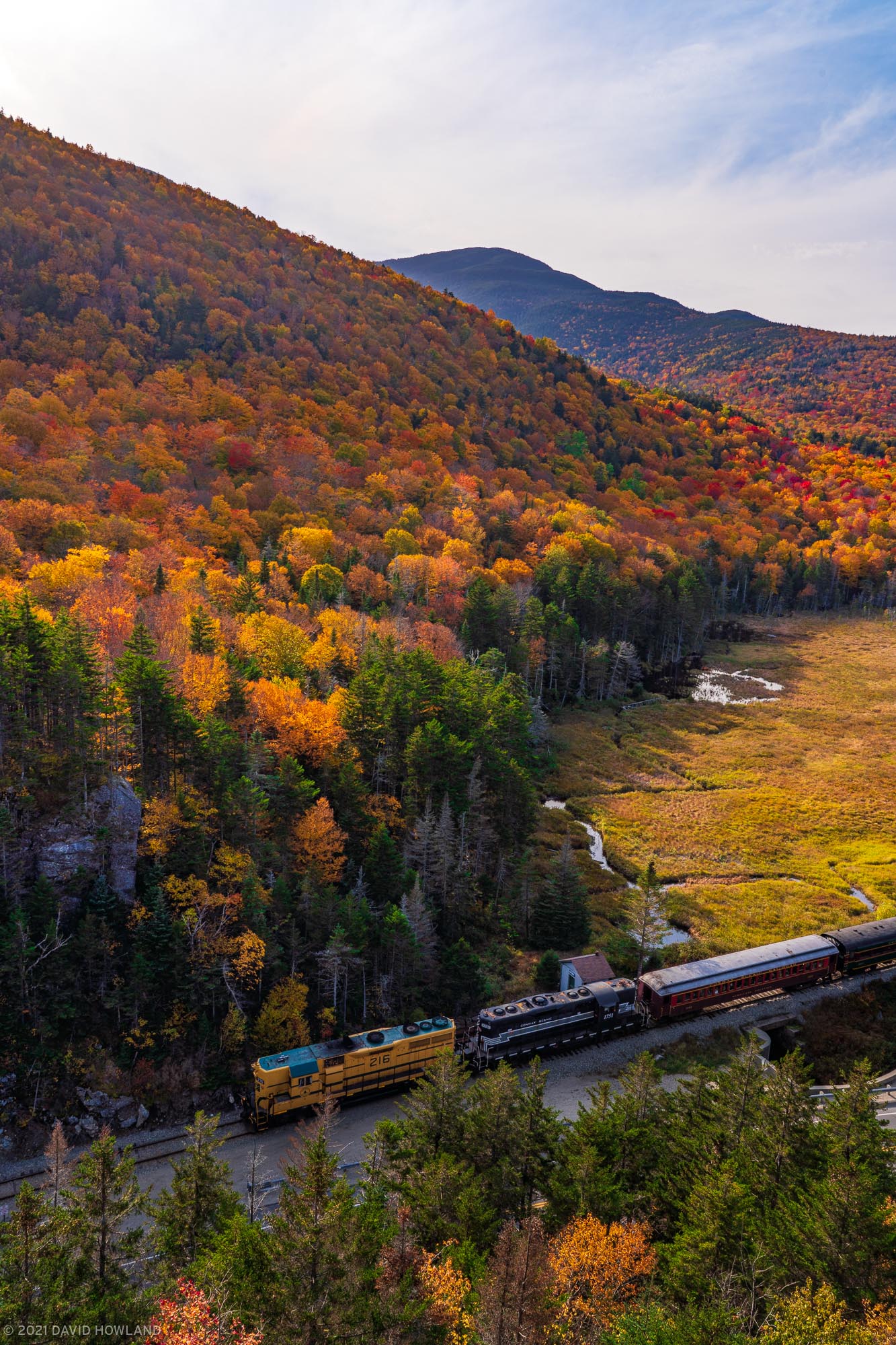 This is one of my favorite train shots that I took this fall. I love the foliage on the hillside and the marsh in the background and how visible the train is in the foreground.

My third stop on this train tour was Mount Willard. The cliffs of Mount Willard are visible in the first set of shots from Mount Webster. It’s on the western side of the notch and from the summit there is a clear view down on the Willey Brook Bridge and the tracks receding to the south. The air was a bit hazy on the day I climbed Willard but the foliage was a little bit more colorful and the view was still stunning. Mount Willard is a short hike and another crowded summit but it’s a large enough area that it’s easy to find a spot to yourself to setup a tripod.

As the train moved up the Notch I was able to zoom in close and get this shot as the engines became visible through a break in the trees. 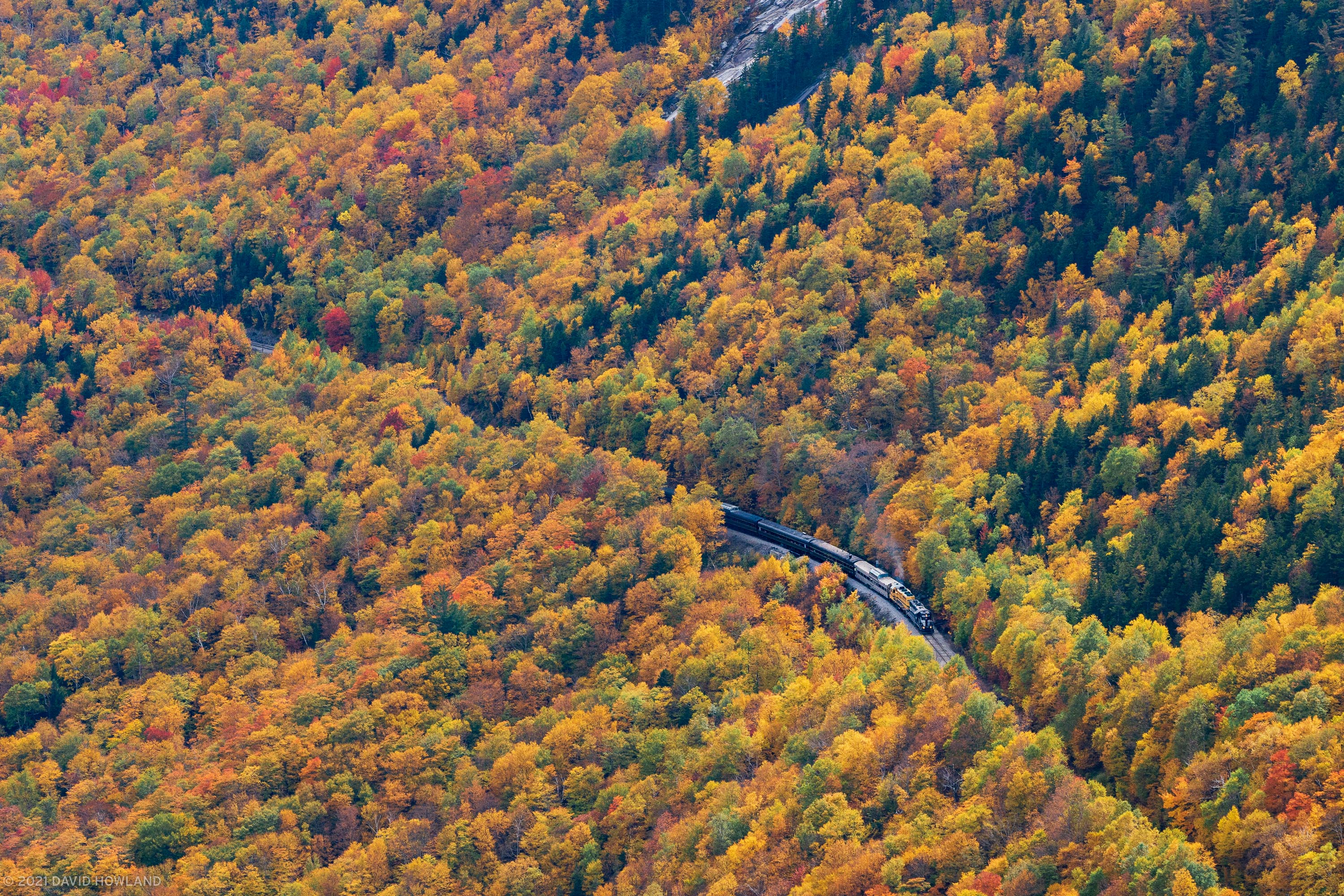 A few minutes later the train crossed over the Willey Brook Bridge and around the corner beneath the cliffs. I’m working on a few multi-shot panoramas to include the train against the entire Notch. 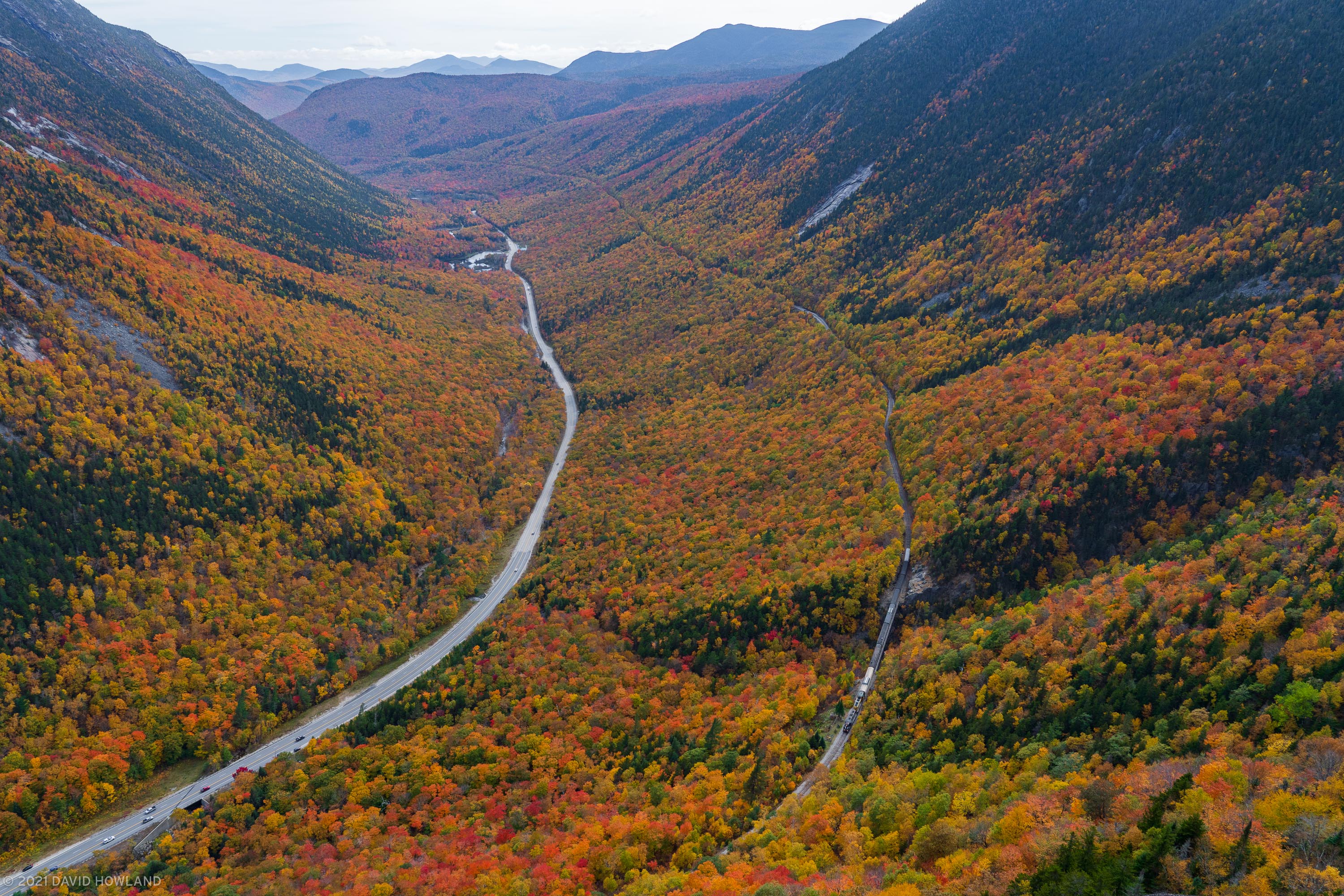 The view looking down on the train isn’t my favorite but I do love the background of both sides of the Notch and the mountains off in the distance.

After exploring these spots I have a few more compositions in mind for next year that should keep me away from the Willey Brook Bridge. Rumor floating around on Instagram is that access to the bridge is likely to be closed soon, anyways.