I spent the first day of October hiking in Dixville Notch State Park in northern New Hampshire. The foliage in the White Mountains was still very green so I drove about as far north as you can drive in New Hampshire to find some fall color.

My first stop in Dixville Notch was at Little Flume. This impressive waterfall is a short walk from the parking area. Afternoon sunlight was filtering through the dense tree canopy and there were red and yellow leaves scattered all around the waterfall basin.

The Sanguinary Ridge trail also leaves from the Flume parking area. The trailhead is not well marked by the standards of the White Mountains but the trail itself is well blazed and easy to follow. It climbs up the rim of Dixville Notch towards Sanguinary Ridge itself. There are several stunning viewpoints along the trail. Rock outcroppings jut out into the notch providing views toward the Mahoosuc mountains in Maine and the steep walls of Dixville Notch. 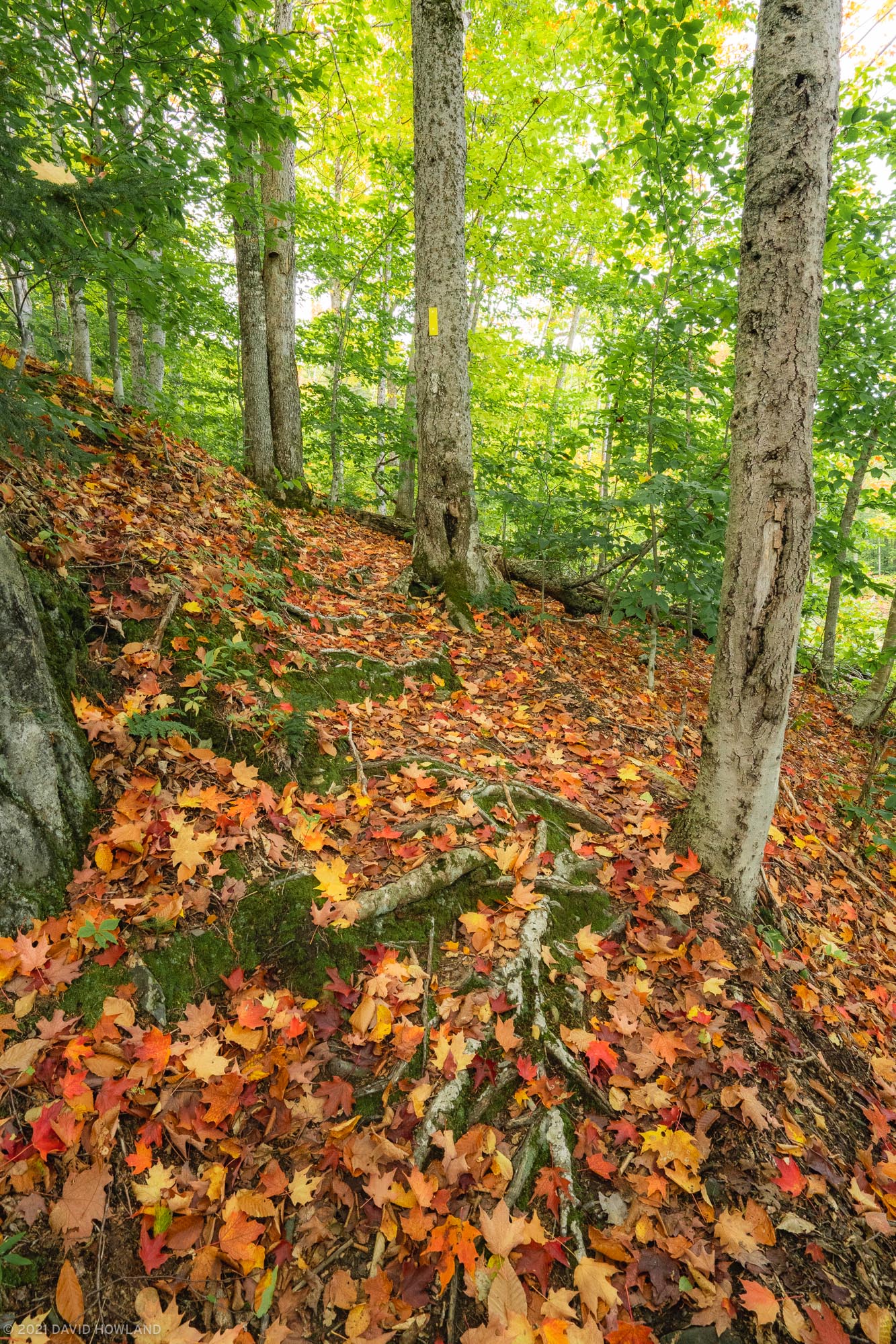 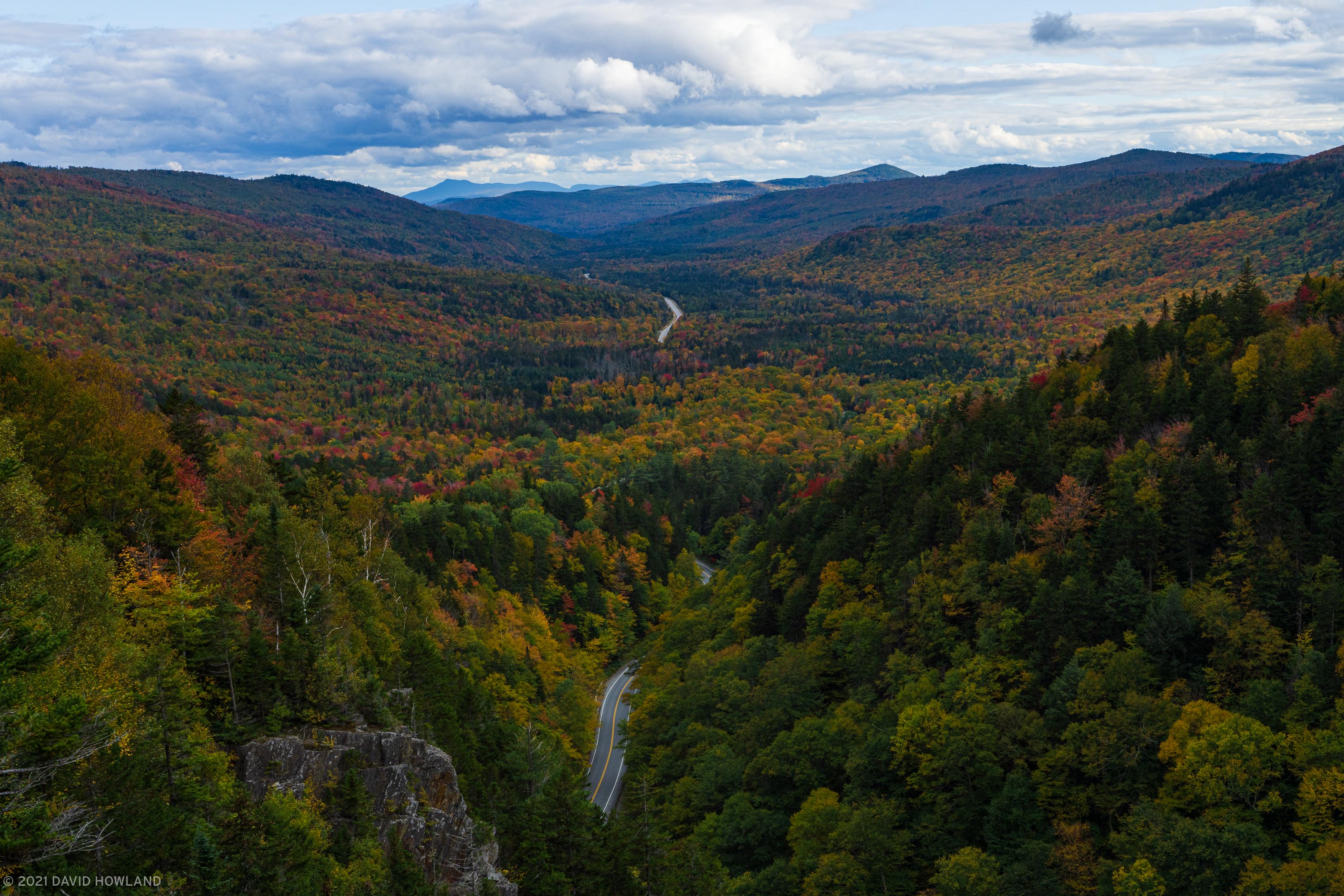 The trail itself was beautiful as well. There was a thick coat of bright red and yellow leaves blanketing the ground. The birches were still bright green and the contrast was stunning. I followed the Sanguinary Ridge Trail all the way up until it met the Sanguinary Summit Trail and then turned around.

My second goal for the day was Table Rock. If you’ve been on Instagram during the fall in the last two years, you’ve seen a picture of Table Rock. I ordinarily try to stay away from the “Instagram spots” as they are crowded and for whatever reason usually full of very inconsiderate people who do not “leave no trace”. Table Rock is too unique to pass up, however, and I’m glad I went.

The clouds lifted back from the notch as sunset approached. There were enough people flying drones around to rival Logan Airport for air traffic but I stayed back from the actual point of the rock and focused on photographing from the sides of the rock looking down the notch to the east and towards Vermont to the west. The light coming in under the clouds was very flat and made for some weird colors in the foliage around the Balsams Resort. 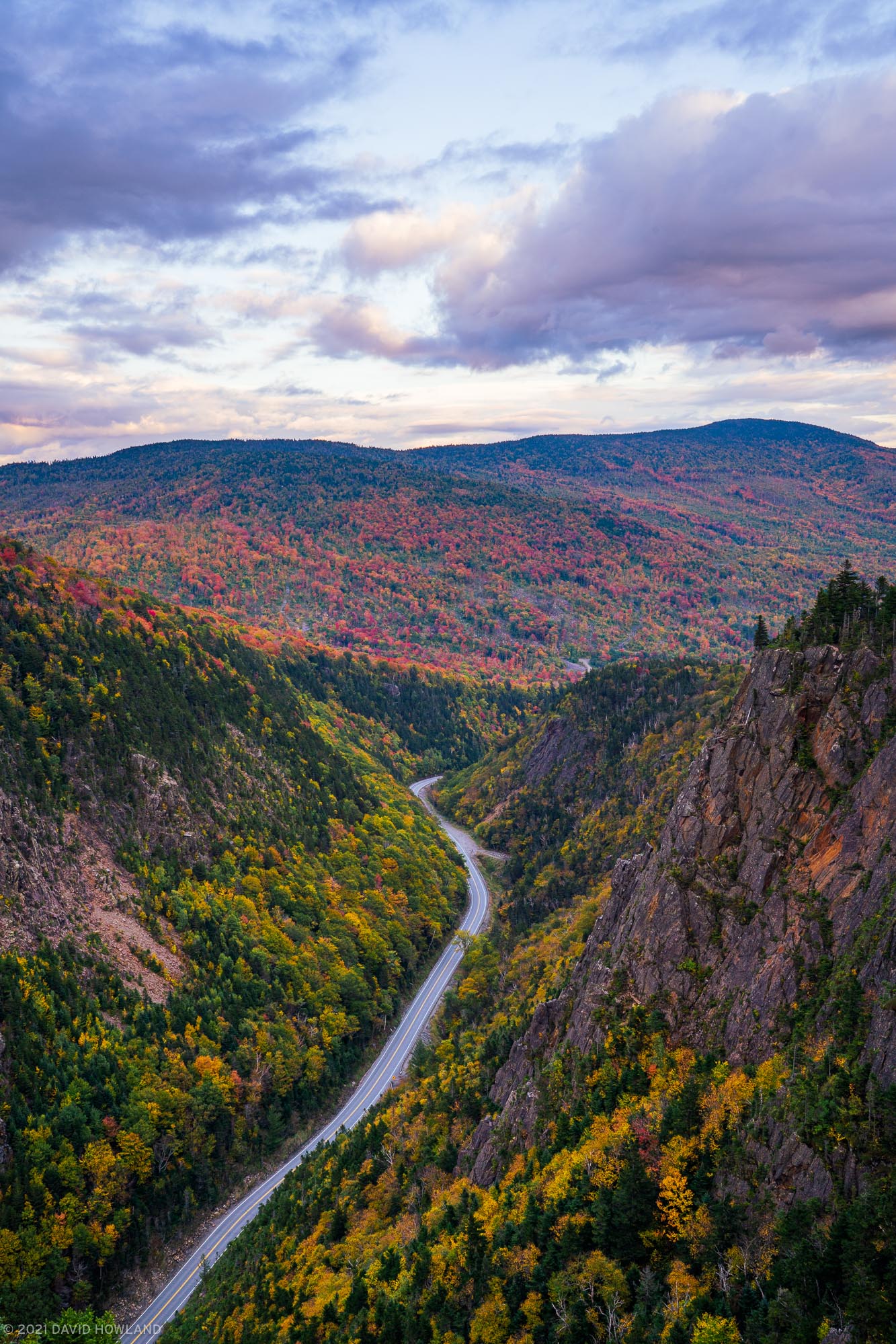 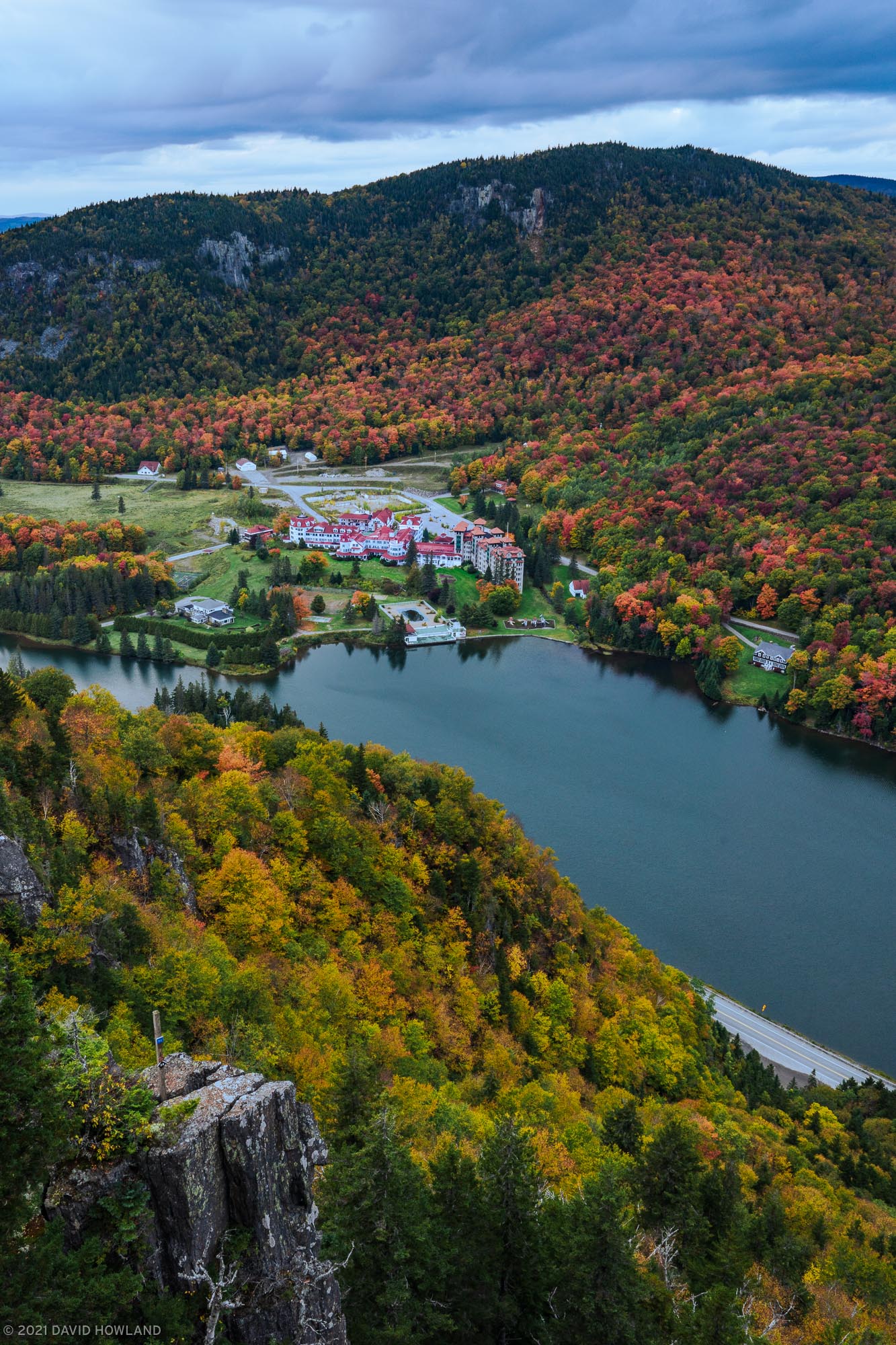 Right as the sun slipped below the mountains to the west, there was a few moments where the low clouds glowed bright orange. I took this photo as the sun moved behind a pine tree and created a beautiful sun star. The color only lasted for a few seconds before dimming out. 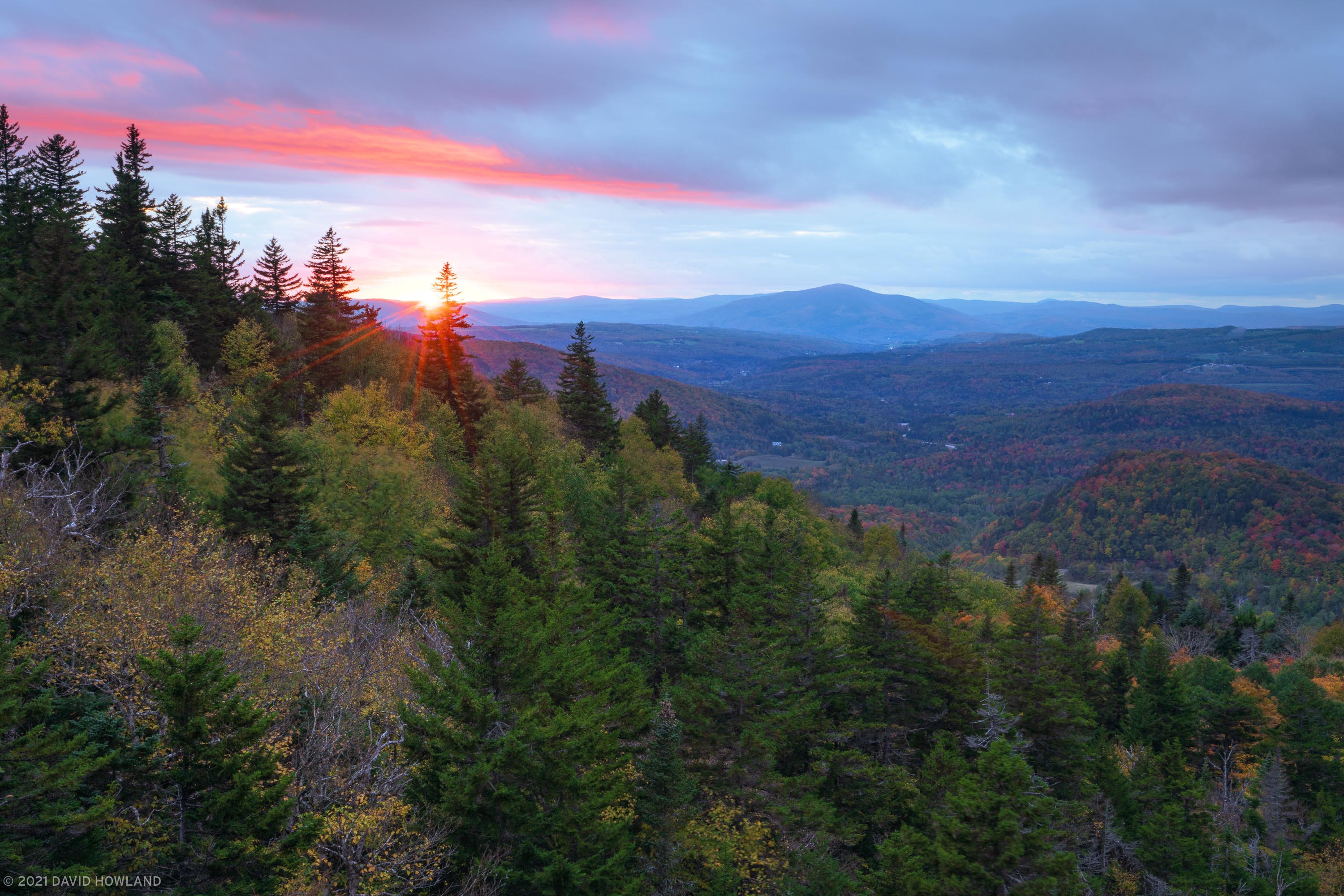 The hike back down to the cars was slippery and cold but nowhere near as solitary as my usual post-sunset descents. Still, despite the crowds and the flocks of drones Table Rock was definitely a rewarding hike.

Next: Hunting the Mountaineer Train in Crawford Notch