I finished off April of 2021 with a great day hiking in the White Mountains. I’ve been working my way through the excellent New England Waterfalls (affiliate link) guidebook this spring. The forecast for northern New Hampshire was two solid days of rain so I picked Champney Falls. My hope was that the falls would be running strong after all the rain and that if the weather was unbearable I could always bail after only a mile and a half of hiking. 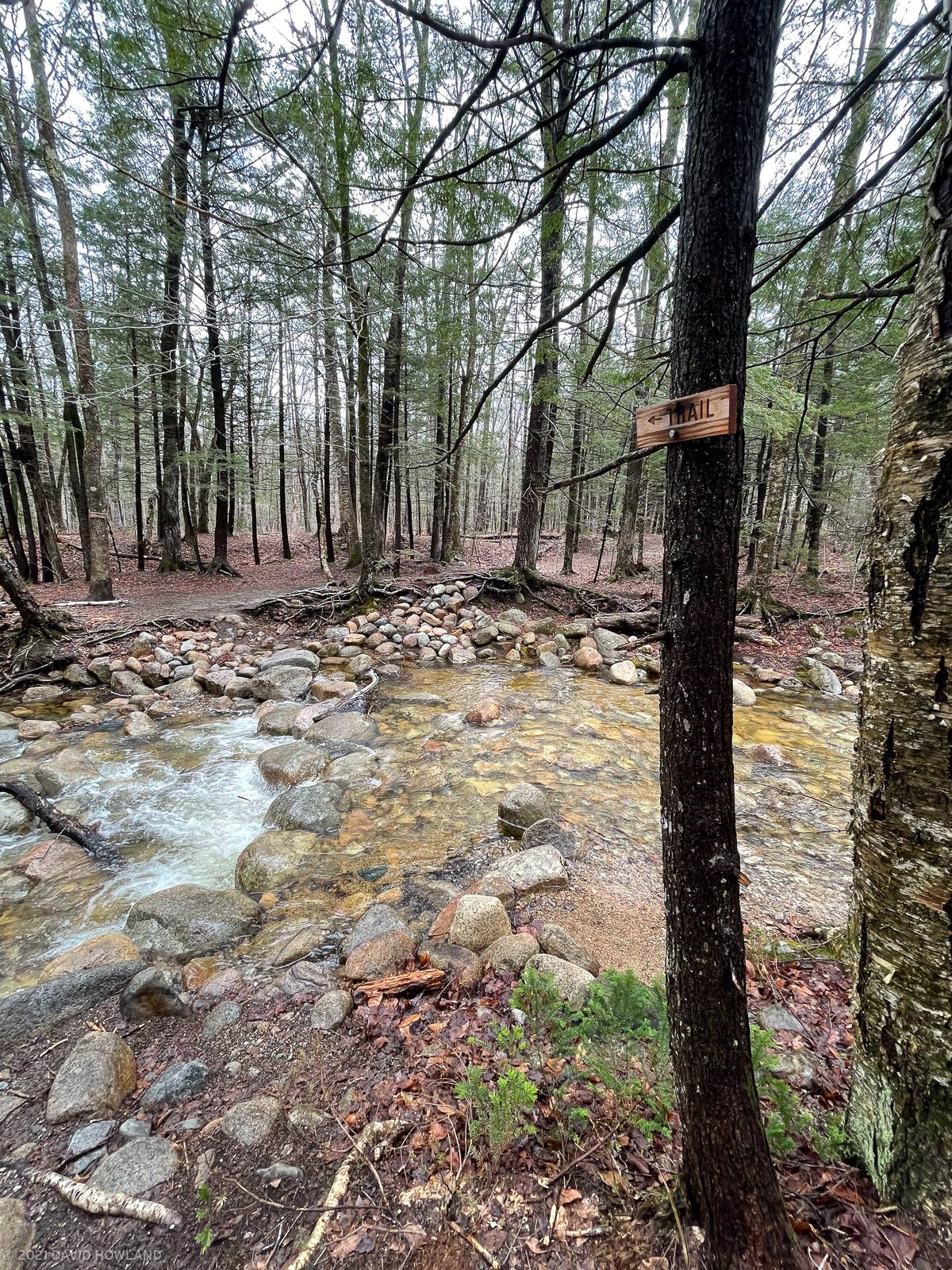 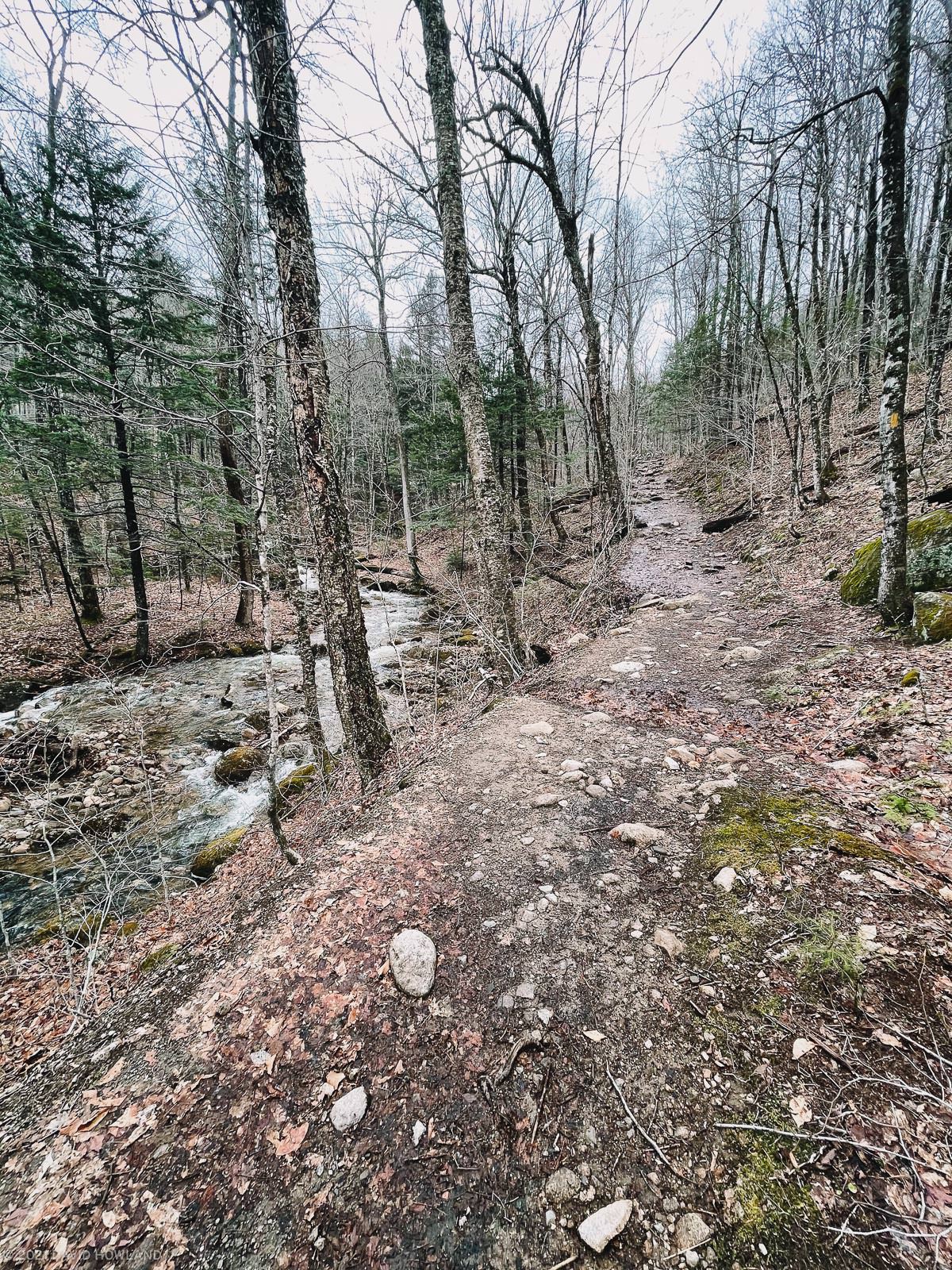 I took the Champney Brook trail out of the parking lot and immediately crossed Twin Brook. The water levels seemed very high to me. I could see where trail crews had arranged rocks to make a rock hopping path across the rivers but almost all of those rocks were underwater. The first mile and a half of the trail paralleled Champney Brook and crossed it three times. From the amount of water flowing down over the trail and the rushing sound of the brook filling the forest I knew the waterfalls would be flowing strong.

In sections the trail itself seemed like it was part of the brook with the amount of water flowing downhill. 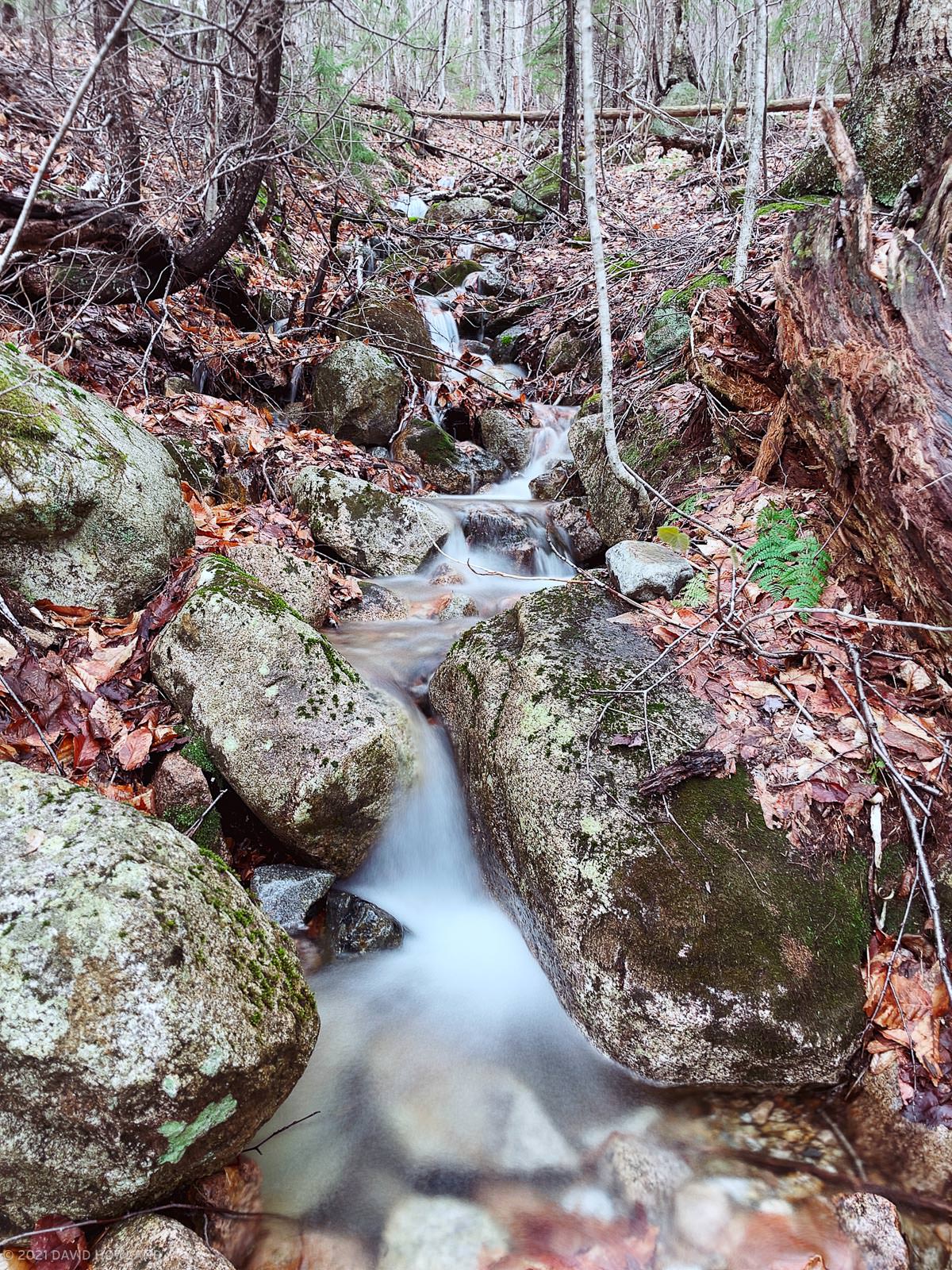 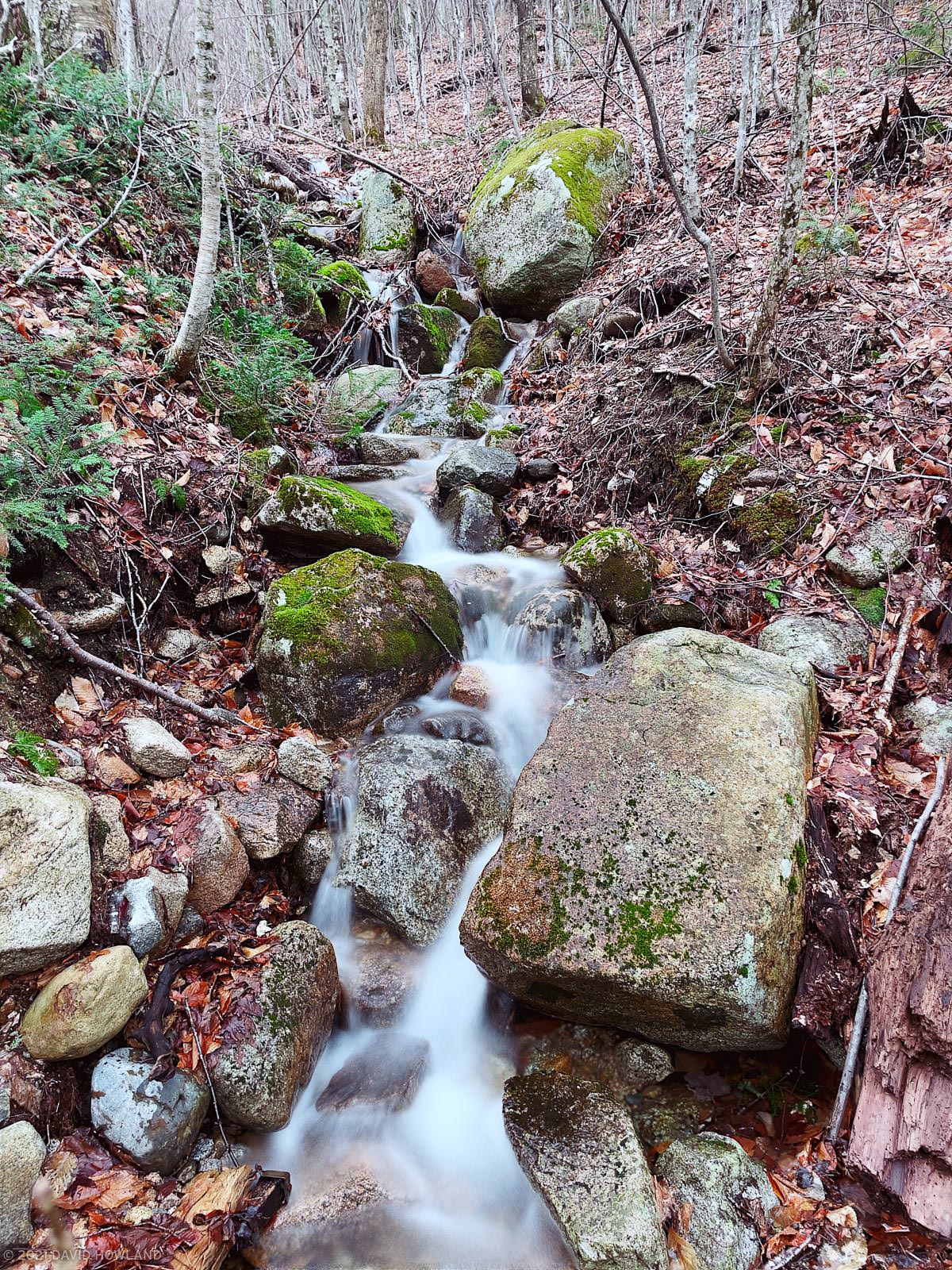 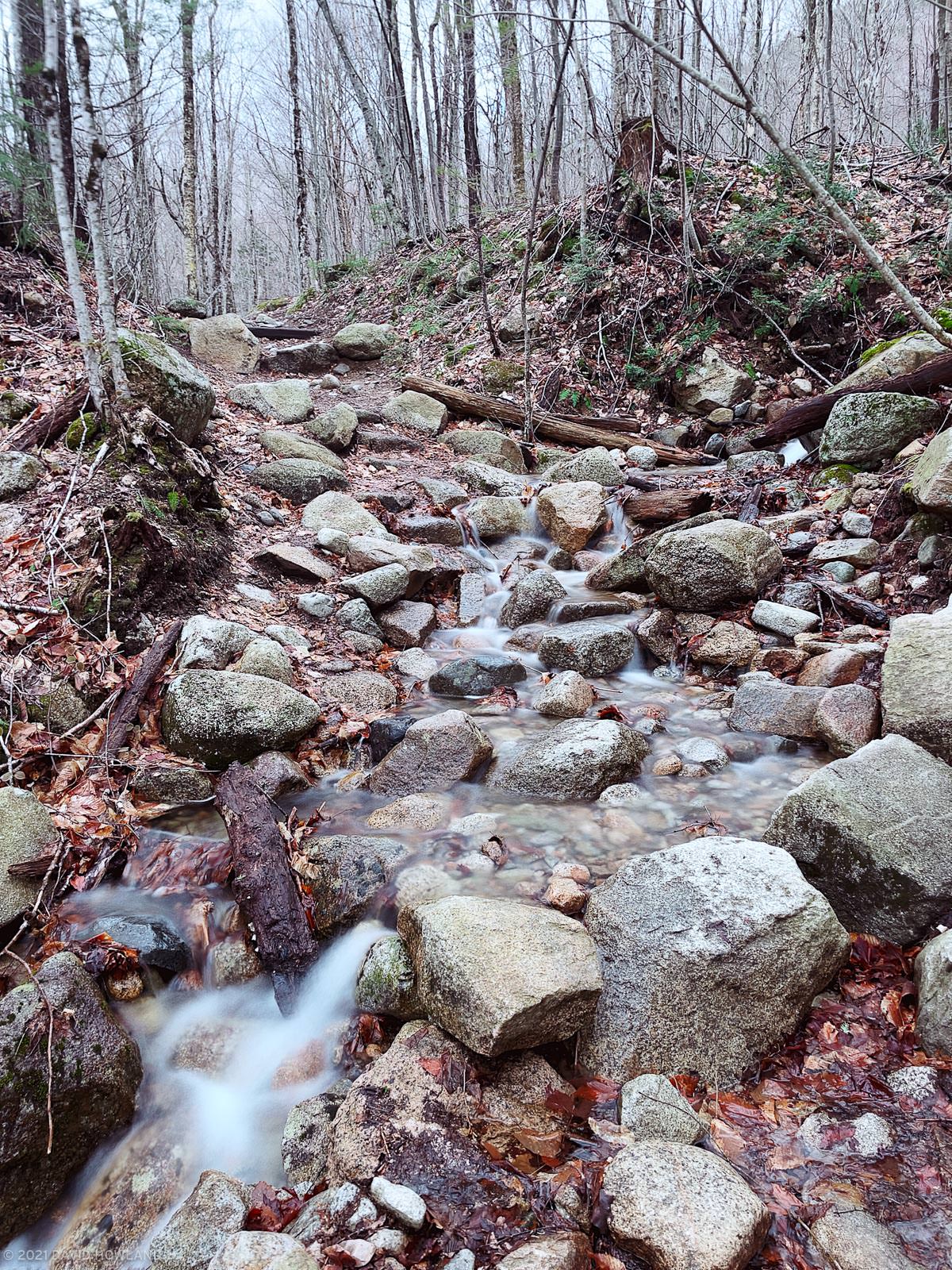 After 1.3 miles the trail forks. The Champney Brook Trail continues uphill to the right and bypasses the waterfalls. A spur trail proceeds downhill to the left to access Champney and Pitcher Falls.

Due to the high amount of water in the brook, I quickly found an unnamed falls cascading down into a large pool choked with deadfall. 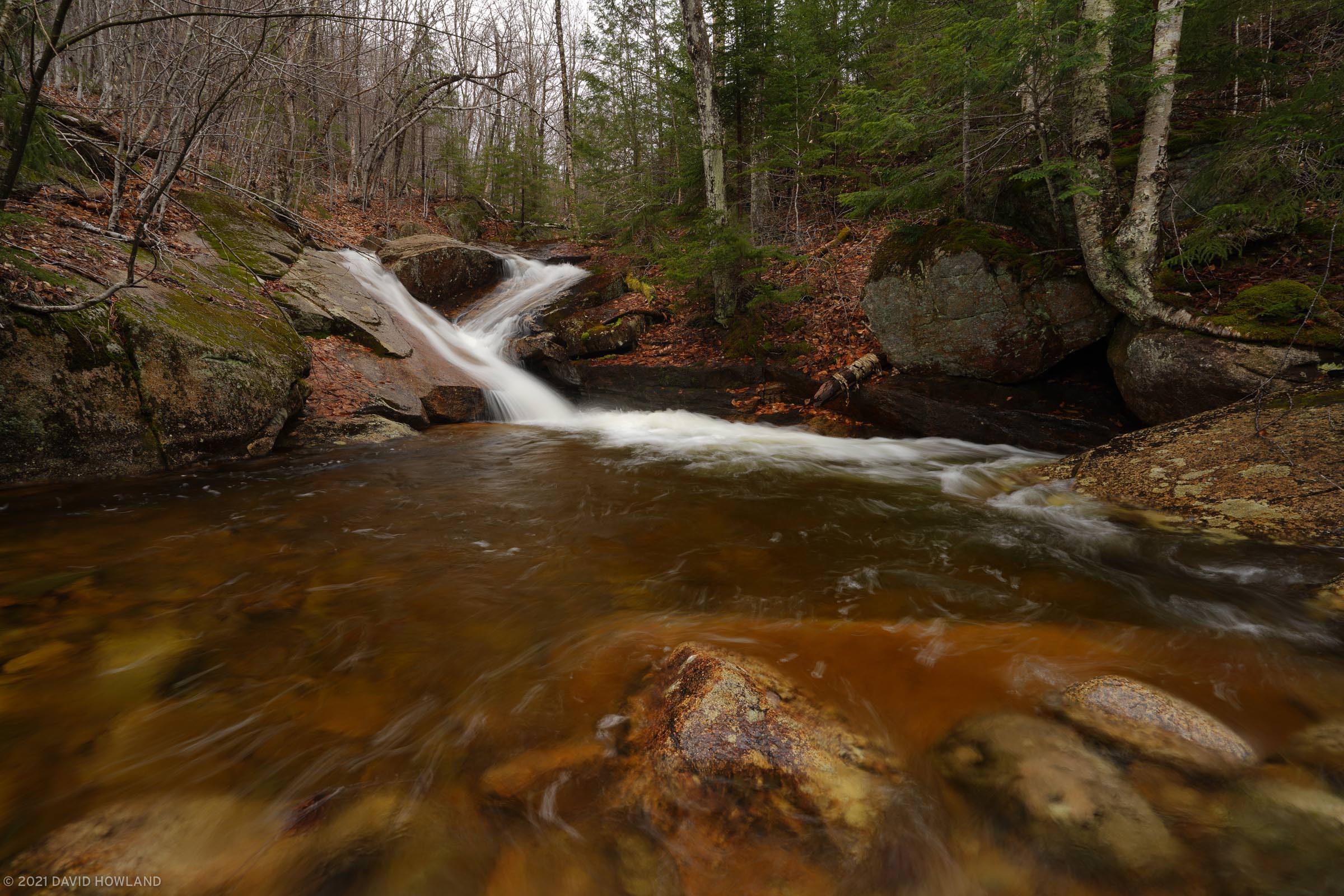 Farther upstream, I could hear a tremendous roar and quickly found Champney Falls and Pitcher Falls. The guidebook mentioned that Pitcher Falls was rarely running and usually only had a trickle of water except for period of exceptional water flow. This must have been one of those exceptional periods. I was barely able to pick my way across the steep section of Champney Brook into the gorge of Pitcher Falls. 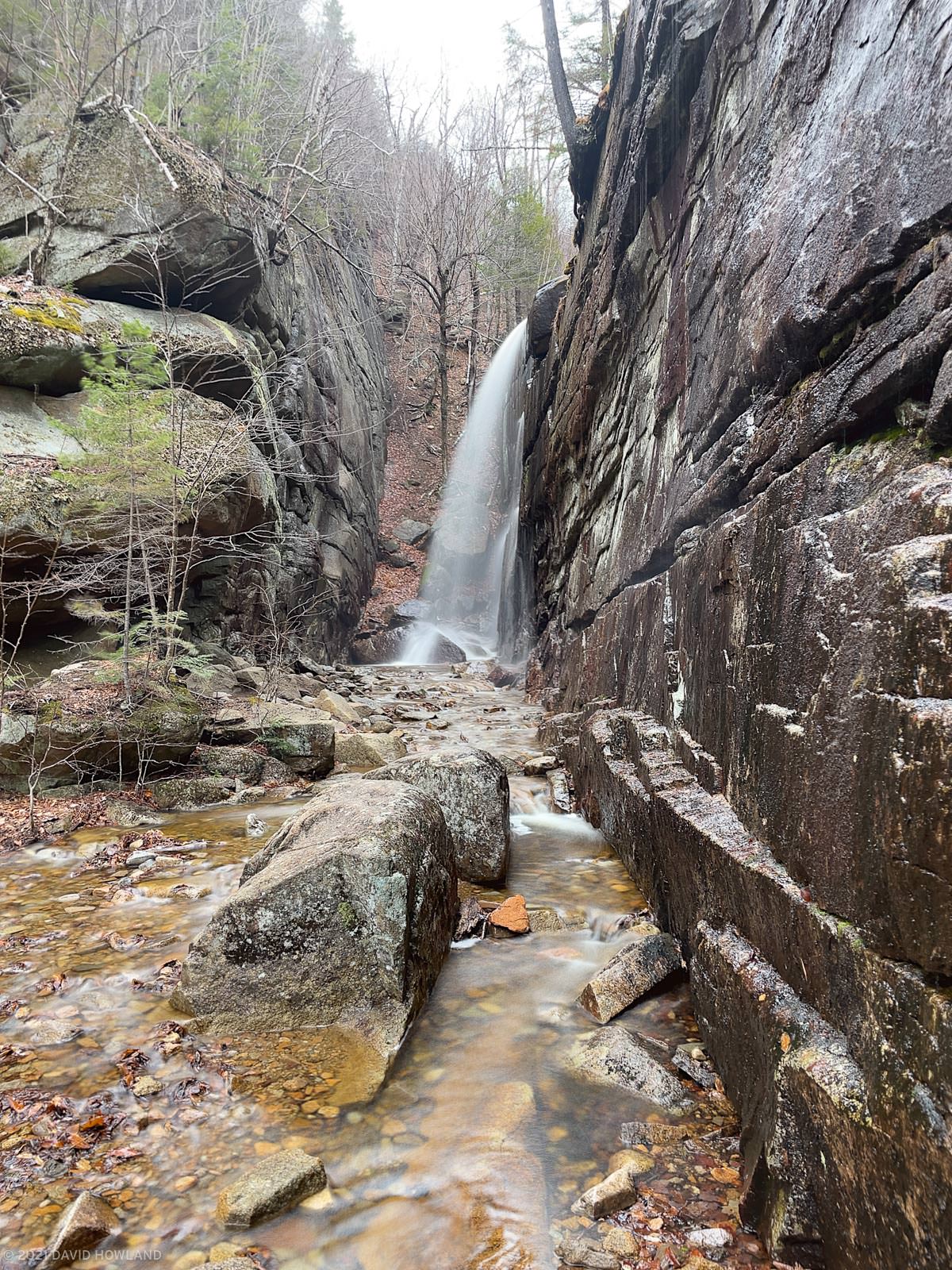 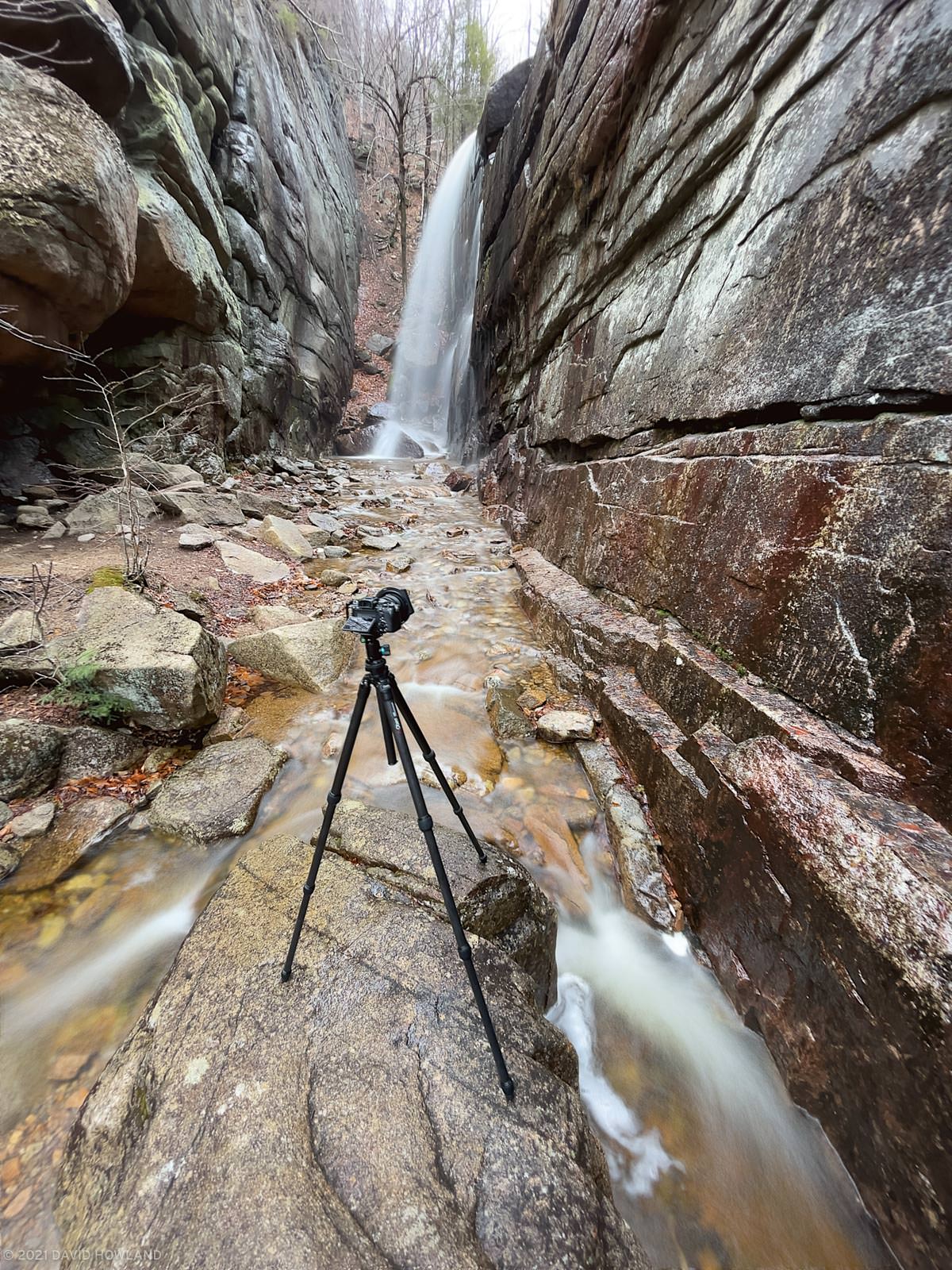 It was difficult to keep my camera lens clear of the spray blasting down from three directions inside the gorge. This would become a theme of the day for me. Despite the spray, Pitcher Falls was beautiful and to me is one of the most physically impressive waterfalls in the White Mountains. The falls drop sharply into a gorge bounded by two sheer rock walls. Water was dripping off the entire length of the uphill wall and the stream flowing through the bottom was strong. It reminded me of Triple Falls in Glacier National Park - a horsetail waterfall bounded on both sides by steep rock walls. 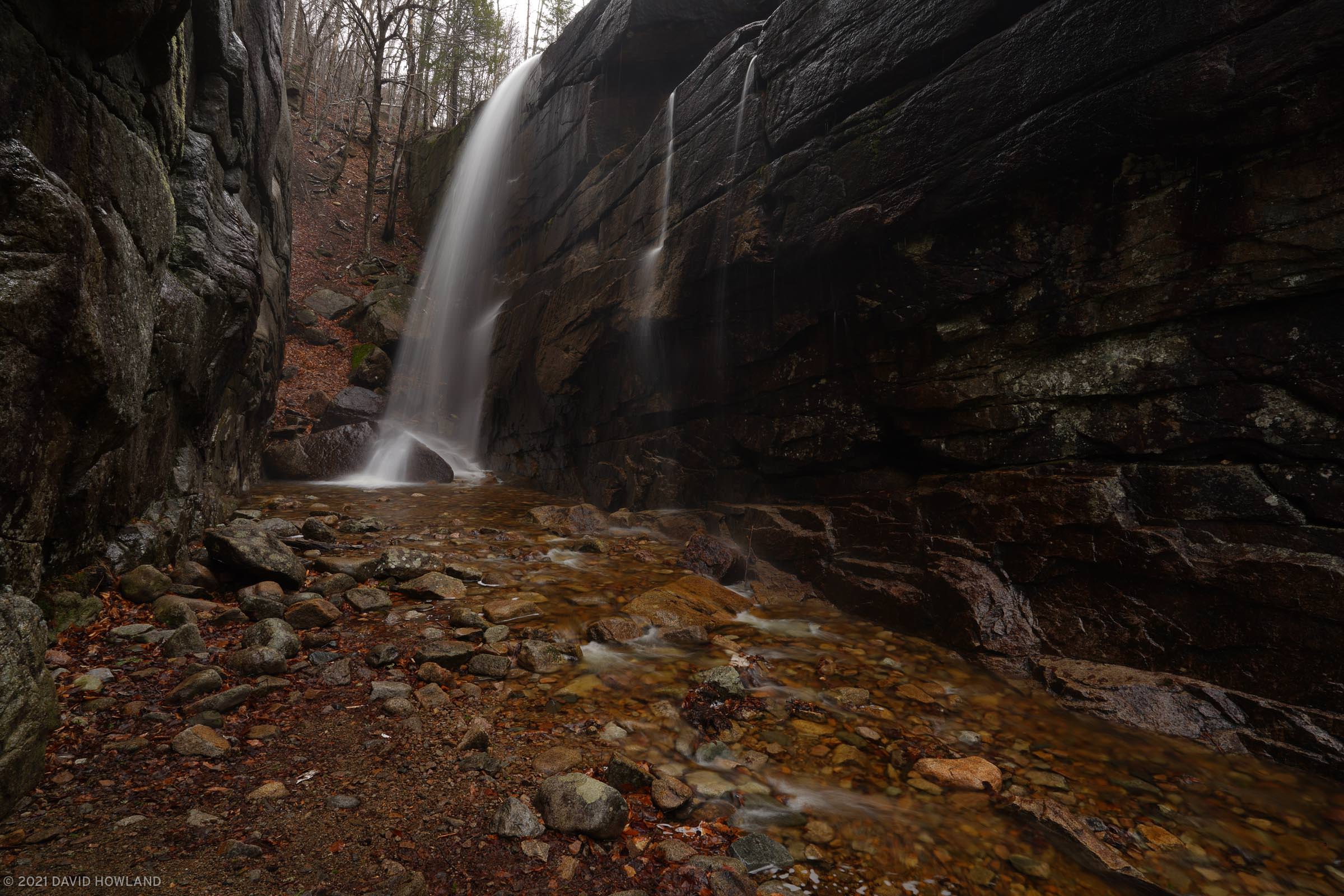 Just at the mouth of the gorge is Champney Falls itself. There was so much water spilling over the slab of rock that forms the waterfall that I couldn’t get very close. I settled for a very precarious tripod placement… 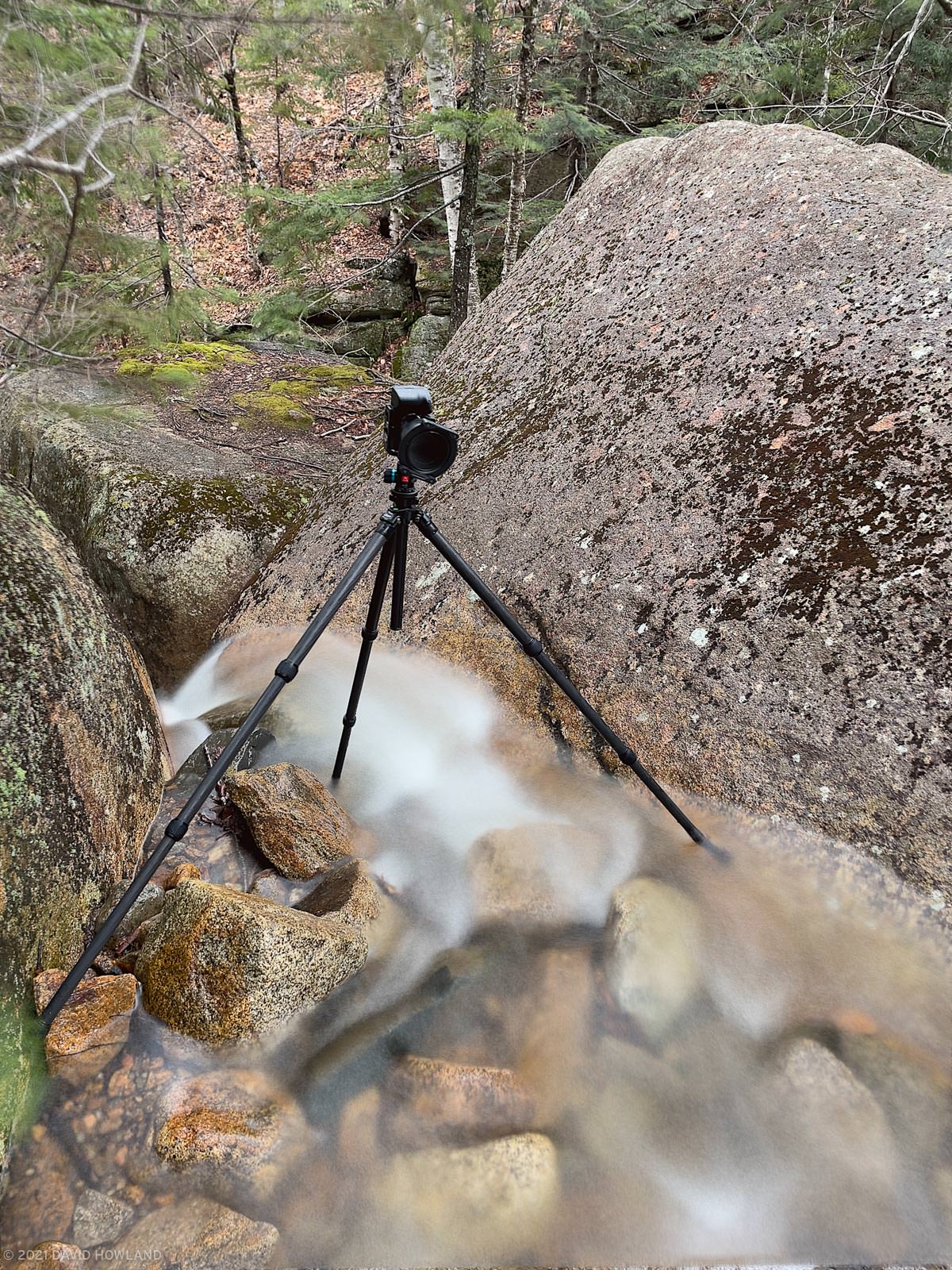 … and took some photos of Champney Falls. 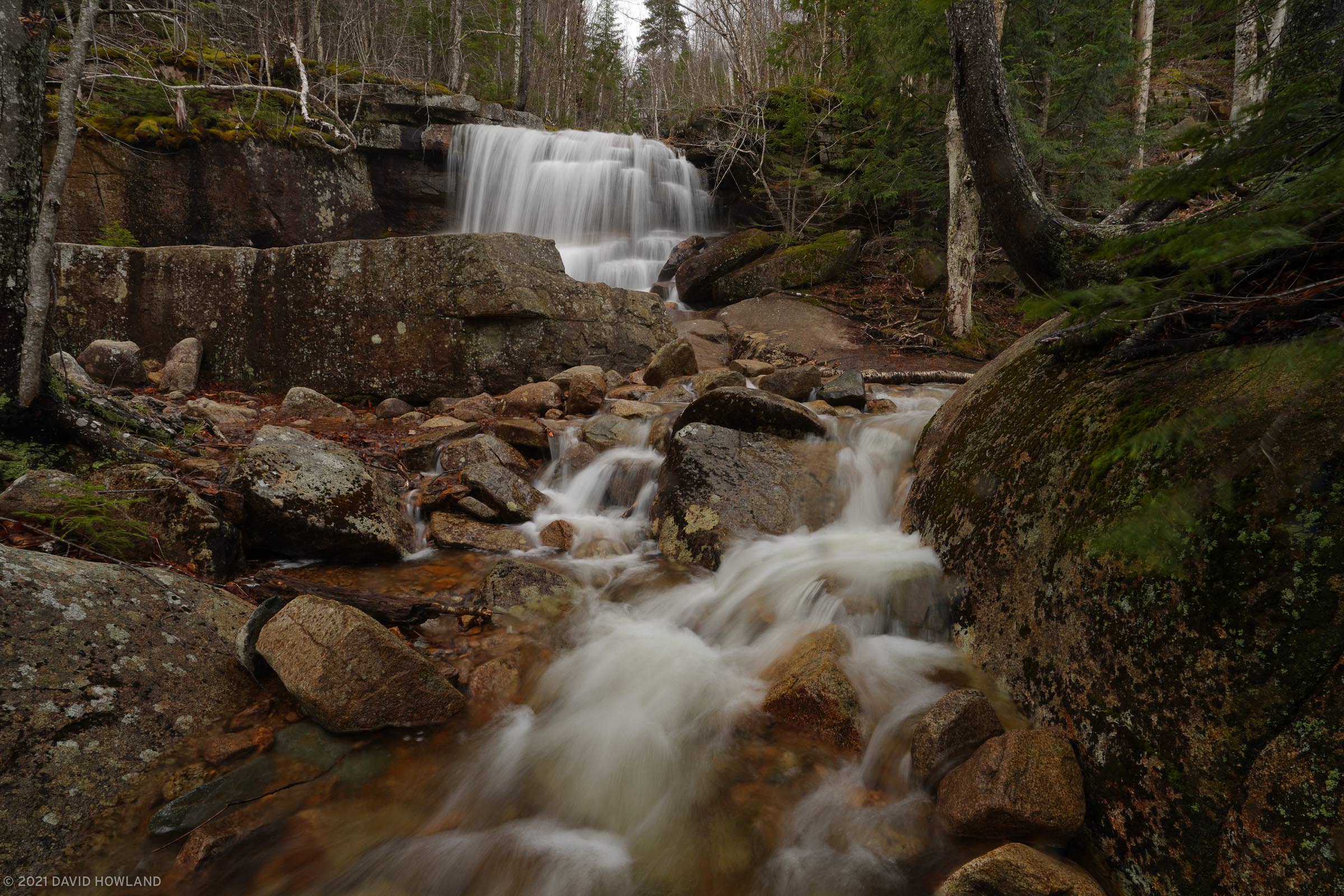 This little waterfall was just below where my tripod was setup for the previous photo. It doesn’t look like it from the photo but the drop and the force of the water would have made slipping a very bad time. 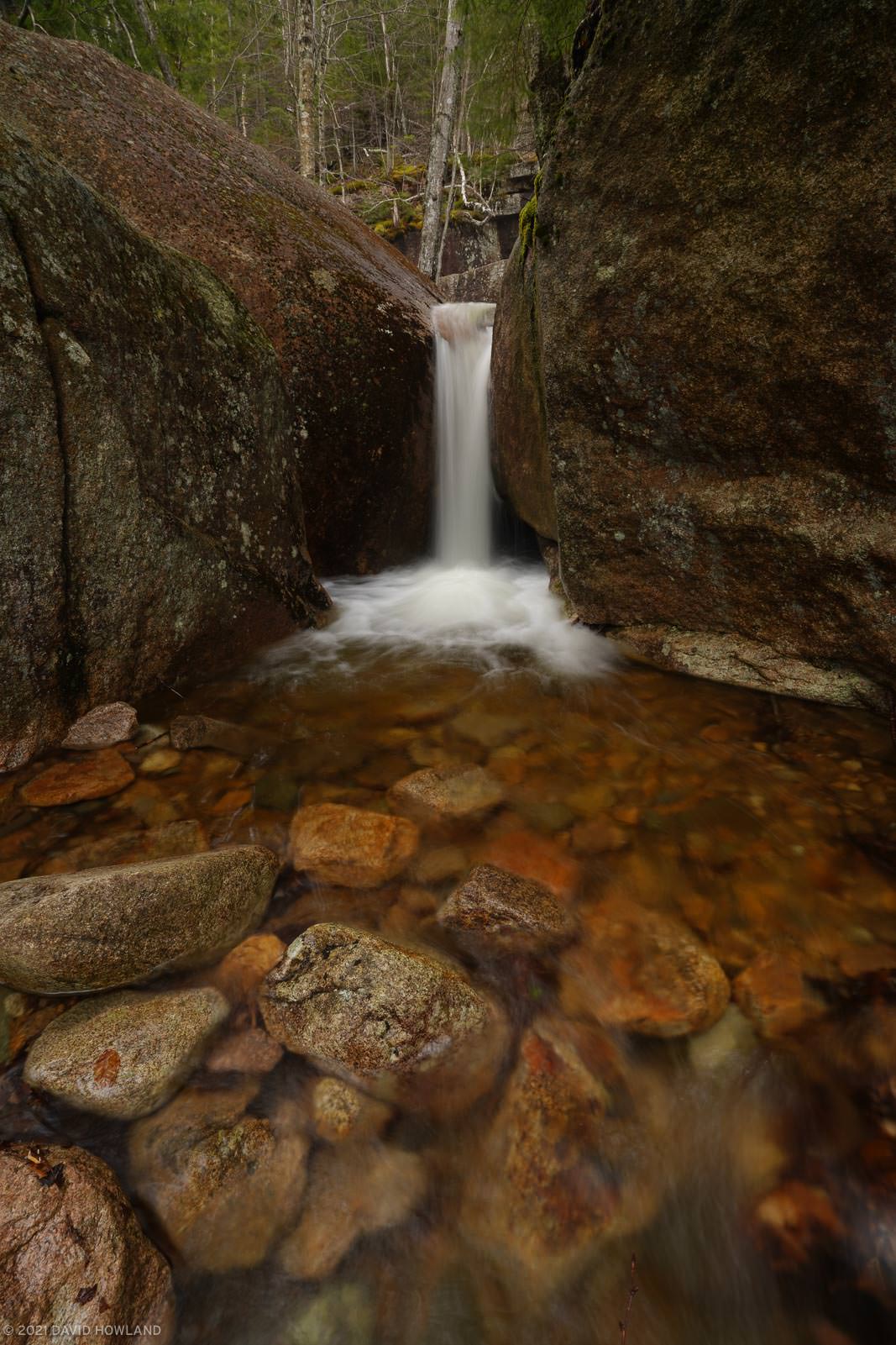 On my way back up the trail I clambered up on a rock and was barely able to fit both waterfalls into one photo. This truly was a great waterfall spot and well worth the mile and a half hike. 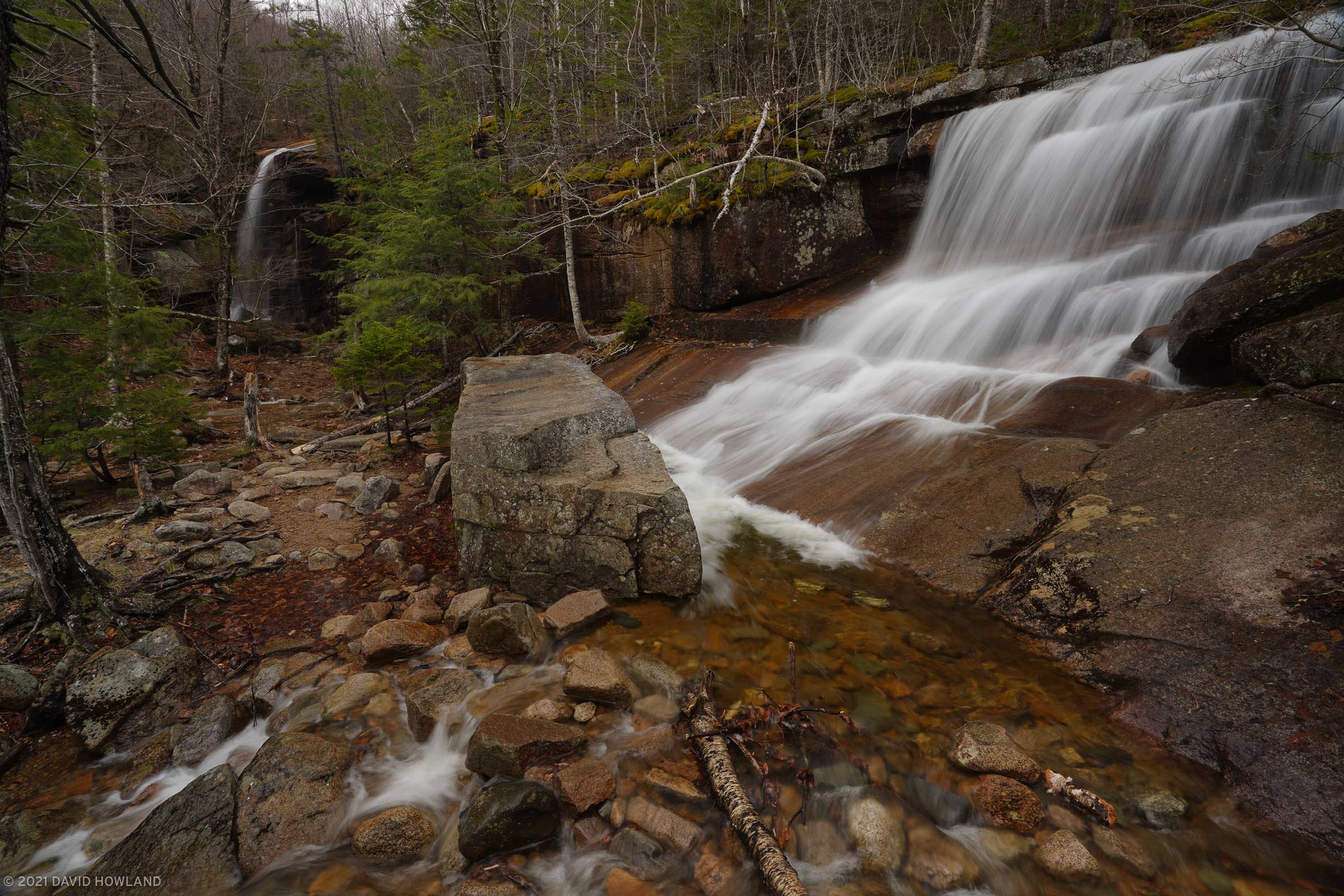 After shooting Champney Falls, I kept hiking another two and a half miles to the summit of Mt Chocorua. As I climbed switchbacks up the side of the mountain I could see storm clouds moving across the White Mountains but the rain held off until I was reaching the summit. 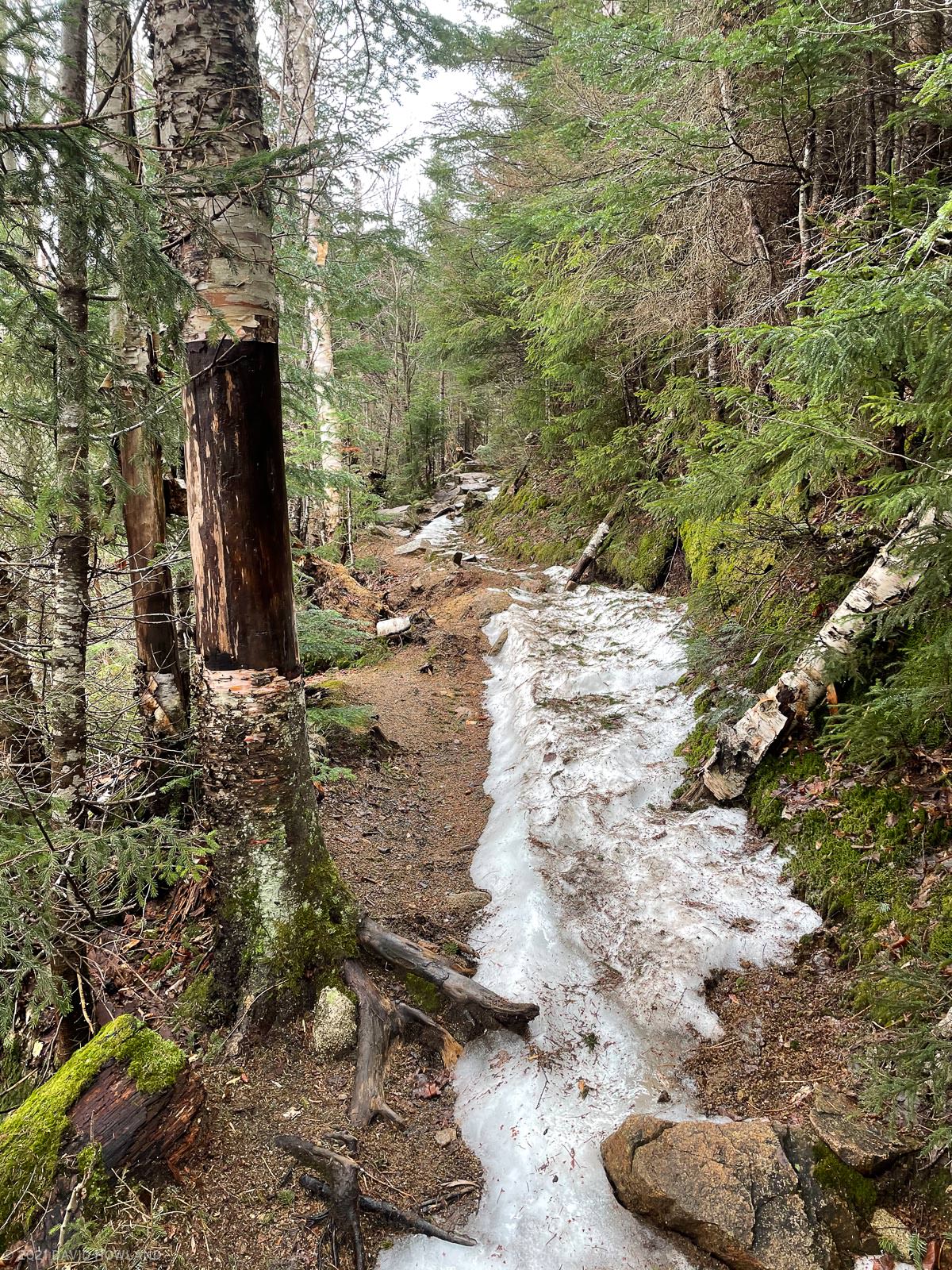 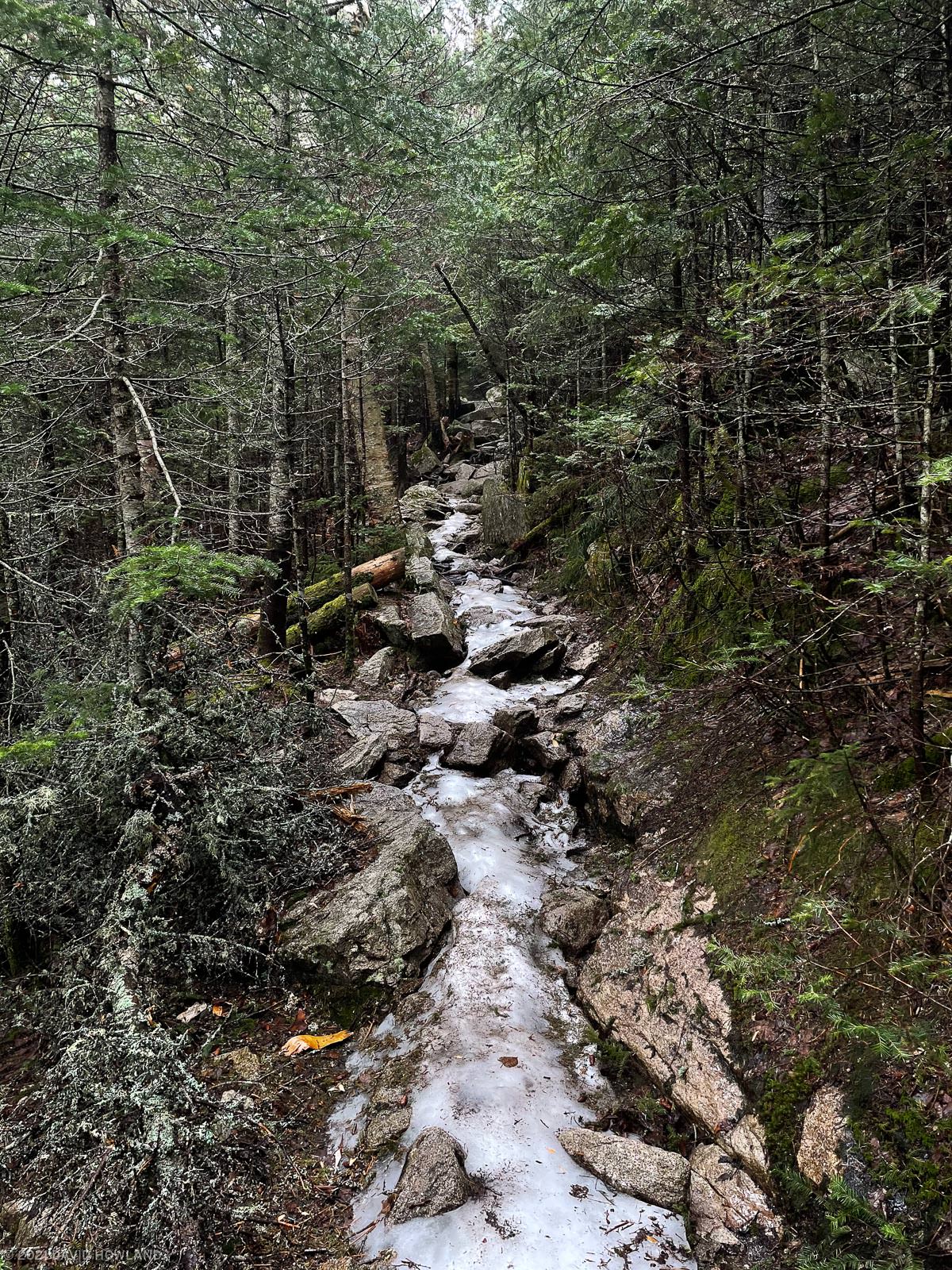 I didn’t see any snow on the trail until 2700 feet and even then it was narrow ribbons on the side of the trail. There was one section of ice that I easily skirted and one short section of wet monorail snow that was easy to traverse. Just below the summit, the Champney Brook Trail ends at the Piper Trail. The last half mile to the summit was a blast as the Piper Trail climbed the exposed rock summit ridgeline of Mt Chocorua. The peaks of the White Mountains were surrounded by rapidly moving rain clouds. 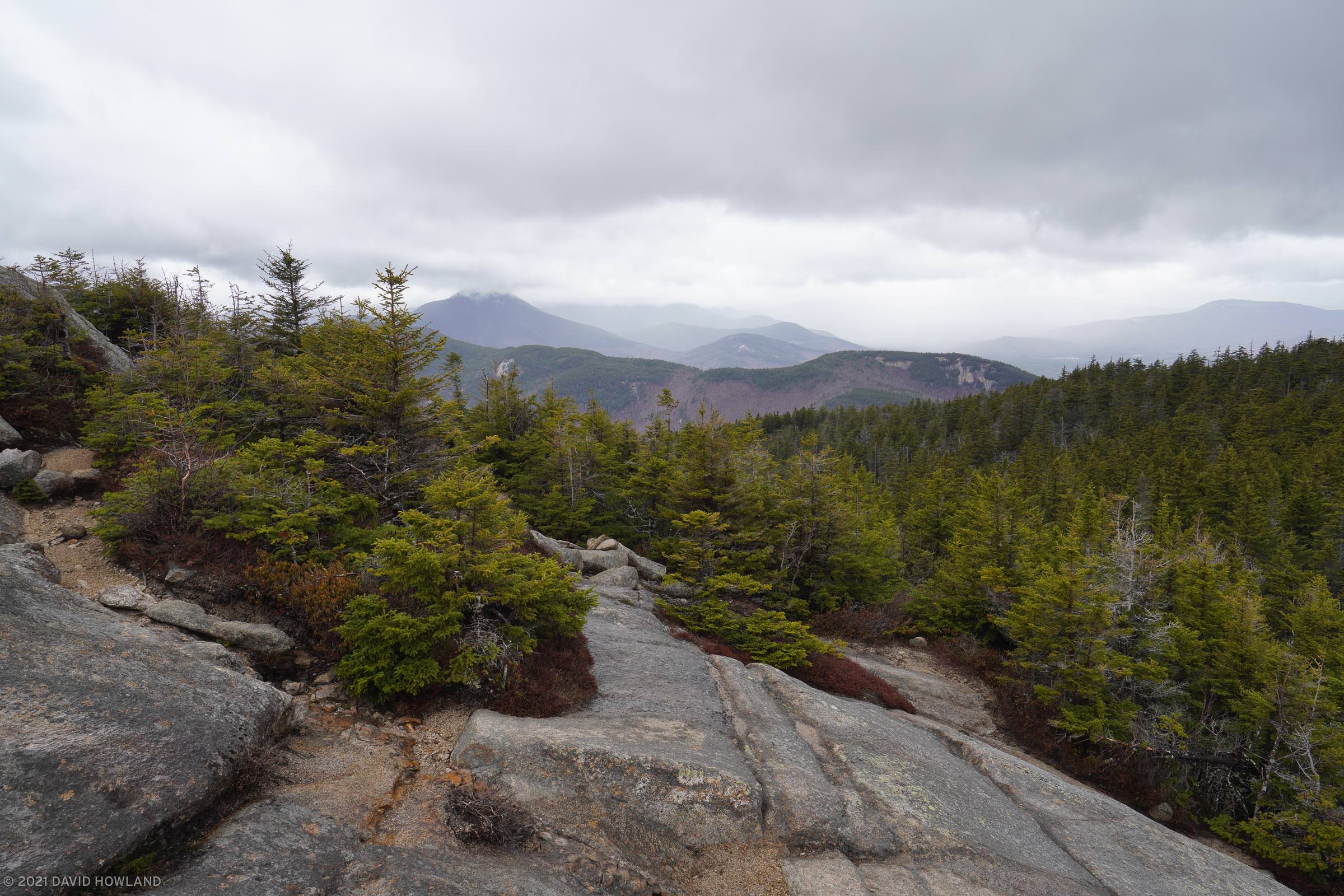 I hung out on the summit long enough to take a couple of summit selfies and shoot a quick timelapse of the clouds moving over the nearby ridgeline. The wind was whipping rain drops from all directions so it was difficult to keep my camera lens dry long enough to shoot a timelapse. 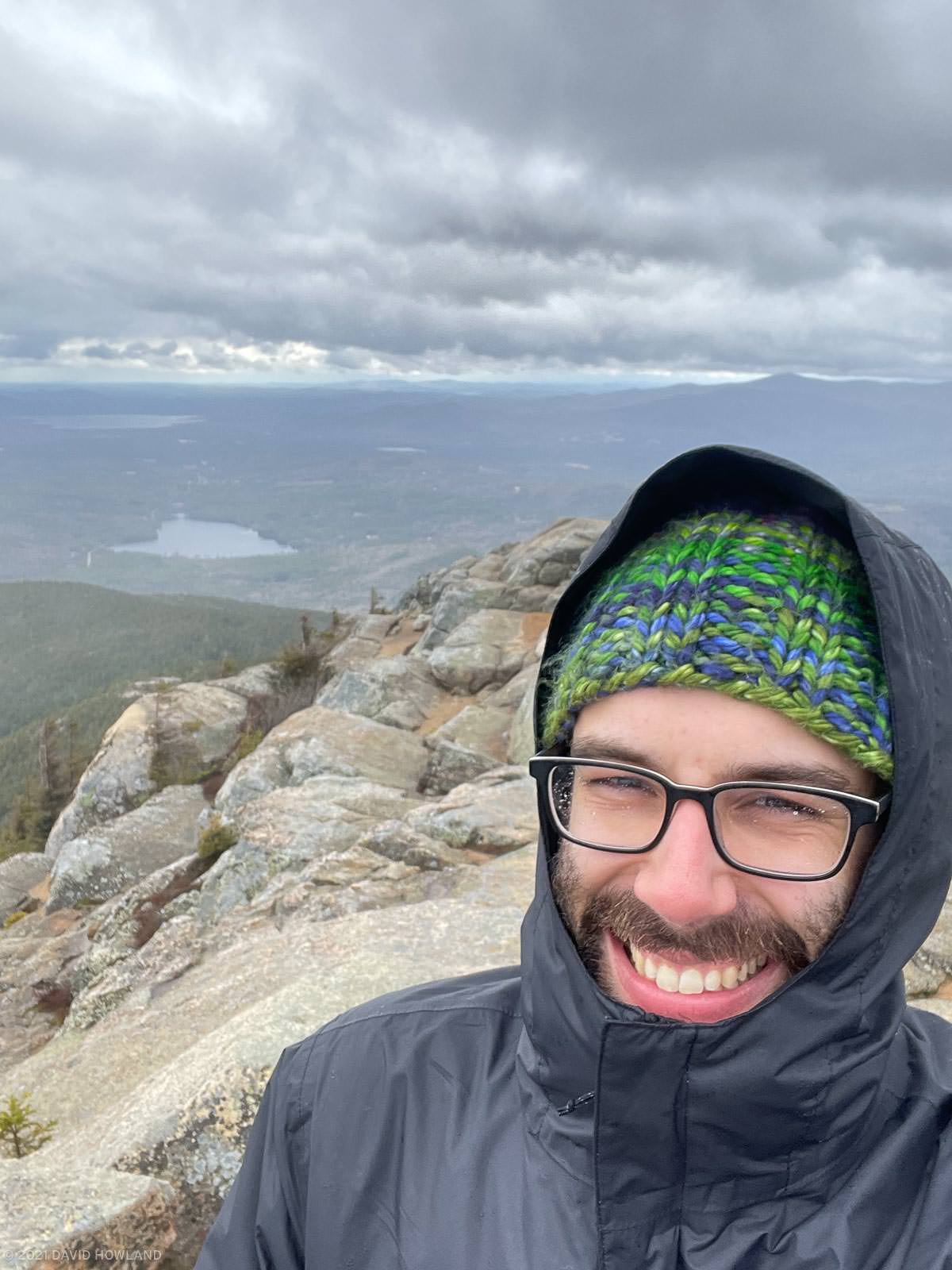 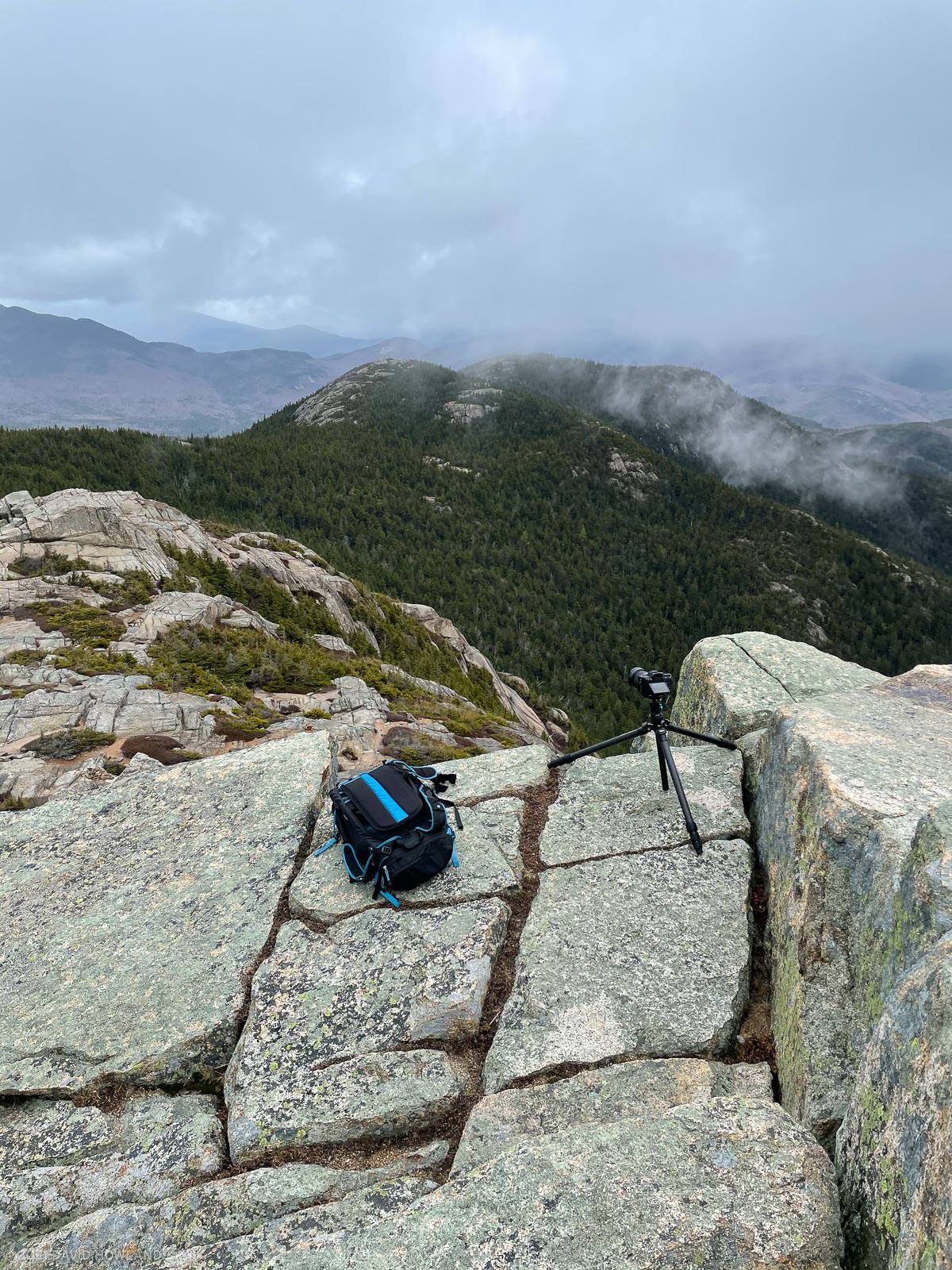 The rain and wind chased me off the summit quickly and the hike back down the mountain went smoothly. I found one cool spot on the section of trail that bypasses Champney Falls and Pitcher Falls. A stone staircase built into the trail had channeled the flowing water into an almost symmetrical waterfall right down the trail. 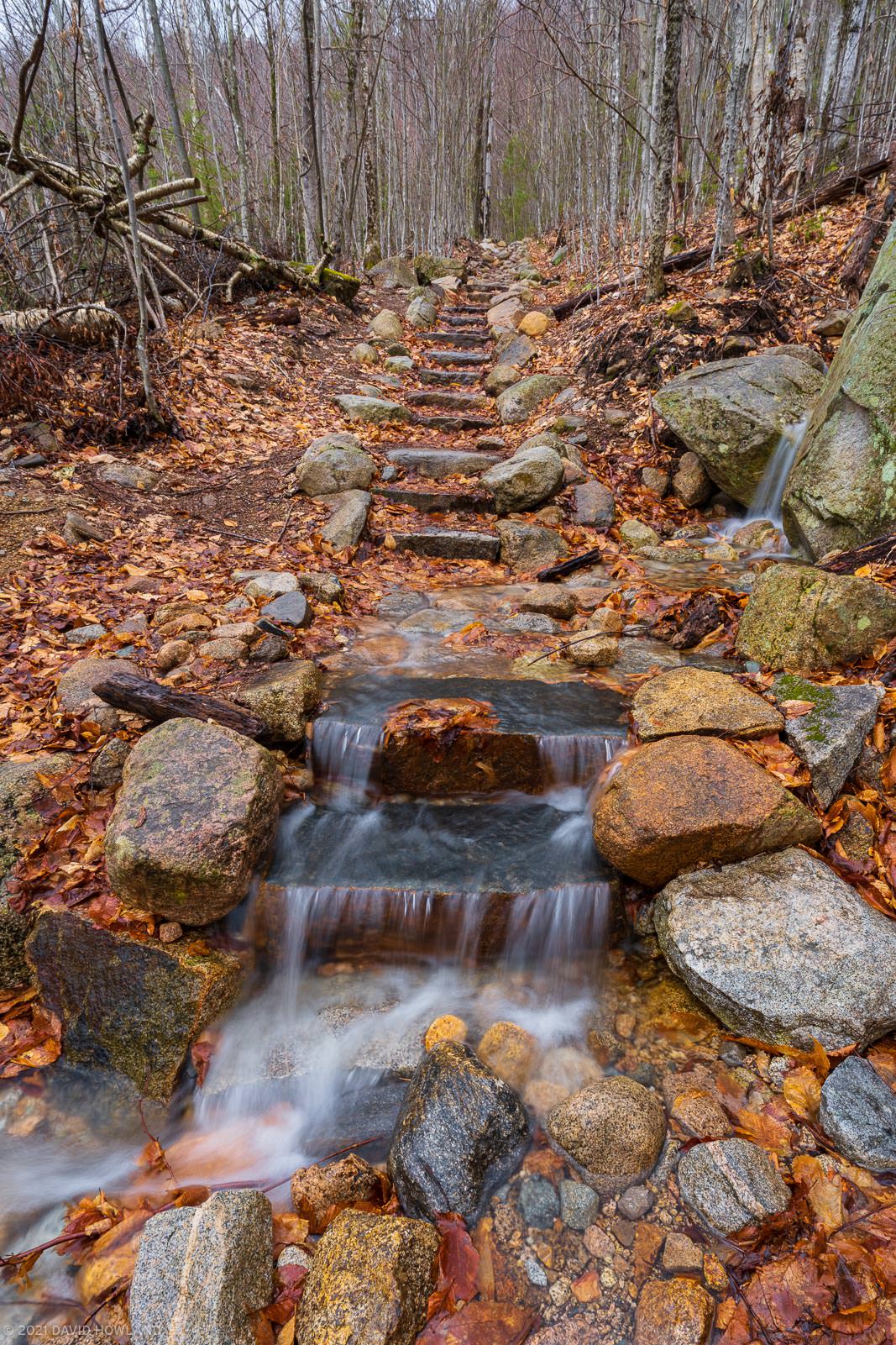 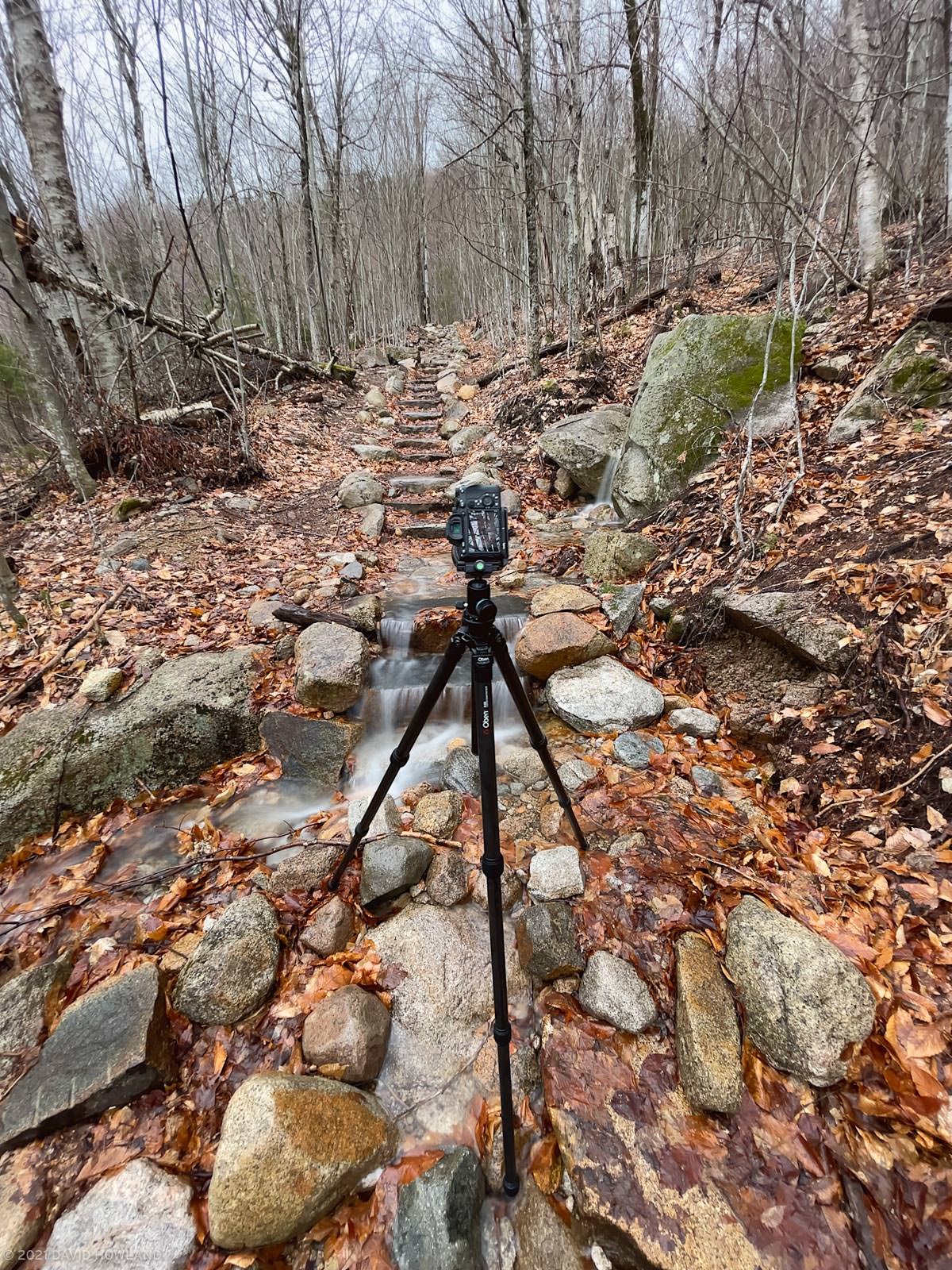 The entire hike downhill the rain was slowly increasing and as I splashed across Twin Brook and unlocked my car the skies opened into a downpour. Perfect weather timing to end a great day hiking in the woods of the White Mountains.

Next: Sunset at Nubble Lighthouse